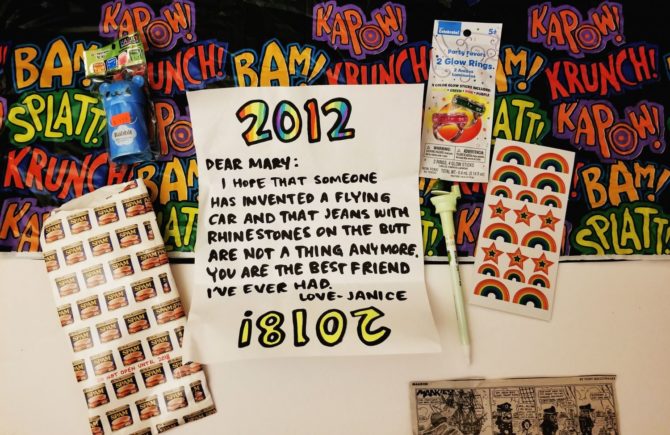 When I was 23, I decided it would be a good idea to make a time capsule that I could open when I turned 30 (because it seemed so far away). I wrapped it up in bright yellow wrapping paper and kept it at my dad’s in a safe place until the eve of my 30th birthday, when it was dug out of a box on his porch and brought to my dining room table.

The next night, as people began to arrive to my party with gifts and cards, they assumed to place them next to the big yellow box and lots of them asked, “Who is that from?” or “When are you opening presents? I notice this one has instructions on it…” (It said “Do not open till June 21, 2018 Love, Mary”). When I told them it was a gift from myself in the form of a time capsule in my early 20’s, plenty of people didn’t believe me or just said “Nuh uh!” I didn’t realize how cool it was until I was met with so much disbelief.

I definitely didn’t realize how cool it was until I actually opened it up with almost all the people I love surrounding me as I splayed out on my dining room floor in a sequined/scaled dress, pulling out things I barely remembered or had legitimately never seen due to my stealthy friends’ care. Let’s start with the most colorful package, shall we? In SPAM wrapping paper, mailed from Utah, was a package from Janice with the most ridiculous plastic tablecloth I’ve ever seen, a kawaii toilet bowl pen and toy, a comic strip, glow rings, and a very accurate/beautiful note. Next up: I printed out what my Facebook page looked like and sealed it up in an enveloped that read “DO YOU STILL USE FACEBOOK?” Hahahha! I guess we can agree that stood the test of time! But the format sure as hell looks different! Check out my profile and cover photo!

Most recent status: “Do you think I could get a discounted pass to next year’s Superbowl game if I promise to only come in at the end when they release the confetti?” A huge part of my time capsule was getting people I knew to write things to me that I wouldn’t look at for many, many years. I passed this note around to people at my work and my local friends. It went back inside the yellow card that people like Charlotte, my coworkers, and even the clients at my job at the psych rehab signed. Three letters featured here are from my ex (then boyfriend), Matt, my dad, and my then boss, LaShandra. My dad didn’t really seem to get the goal, he wrote like what he thought the military would be doing now (HAHA), but at the end he said I would still be the best kid a dad could ask for.

LaShandra rambled for a long time about what was happening that day, which I LOVED and really brought me back to exactly what life was like at that time, and then she told me how she felt about me and what she thought I could achieve. I’ve always felt so supported by her, and here it was in writing before I even decided to officially start my own business and she launched her faith in me in that way.

And then there was Matt, who I would continue to date for about a year after this letter was written, and in some alternate universe where we would have stayed together, I bet I would have been kind of bummed at his approach to this letter, but in this reality, I was so happy with it. I remember worrying that he would do exactly what he did, and as I opened it up on my birthday night, I hoped to the universe that he did what I hoped he didn’t do seven years ago — be hopefully nihilistic. He basically told me exactly what we were up to at that time, how much he loved me at that moment, how much hope he had for me in the future, and that he hoped he could say he loved me the same amount in 2018. It was perfect. This yellow card had Katie and Charlotte, and some coworkers. Charlotte is still absurd and my longest running friend (and the only person who was in the time capsule and at the party — Janice is still in my life, but all the way across the country, haha). Here are some pictures I printed out that were in the box, including my favorite mural that has since been painted over, Bug, Sadie (RIP), my coworkers, my boss, my ex, Janice, Charlotte, mail art I sent in my 365 project, me as a kid with my grandma, my first knitting project, one of the most beautiful skies I had ever seen with Char on a Friday the 13th in January, and a rainbow fence I had recently found. And finally, here are some random things that were in the box, including a rainbow star decoration, my favorite pen (Precise V5 gel) at the time, confetti, an Ariel toy, glitter, a pay stub, googly eyes, some of my favorite songs at the time on a mix CD, and postage from that time, including custom postage I made myself.

AND. I wrote myself a letter. That’s amazing. I cried so hard. You can watch me read it in this video.

If you’re thinking this is awesome and even musing about making one for yourself, DO IT. I think I’m going to make one again for my 40th birthday ASAP and try to have it finished by the end of summer. It doesn’t need to be for a decade birthday, either. Like if you’re 37 and you’re thinking, damn 3 years doesn’t seem long enough, screw it! Do it for your 47th birthday! Or for your 45th birthday! I did it with less than 7 years and it was an incredible experience. My favorite part was the stuff I got from my friends, so I definitely recommend that.

What would you put in your time capsule if you made one right now?