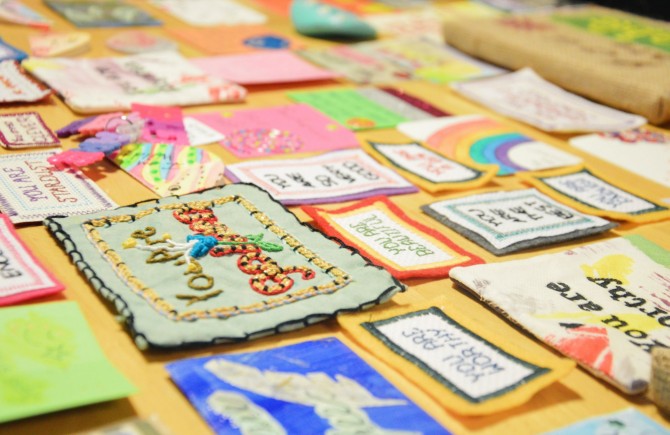 You Are So Very Beautiful: Guerrilla Kindness After I included a “craftivsm” hashtag on an Instagram photo, Betsy contacted me. She had this idea for a guerrilla art style craftivism event where we would make and collect positive affirmations from all over the world to spread around a city. We created the call for submissions online and watched the most beautiful and creative pieces of art pour into our PO boxes. The idea was to combine self love, kindness, and creativity. Positive affirmations are a great way to boost your self esteem and feelings of self worth, and as Betsy said, if you’re stitching an affirmation it takes a bit of time and you are forced to concentrate on the words. It becomes kind of imprinted in your mind, and then the person who finds the affirmation on the street can benefit from it also. Win win! On February 7th, Betsy drove all the way to Baltimore from her home in North Carolina. I met her in person for the first time as locals who heard about the event began to trickle into our meeting place of the quirky and quaint Cafe Latte’ Da in Fells Point. We sat on their comfy couches as we created some last minute pieces and answered questions for the reporter from The Baltimore Sun who followed us around for the day. Just some of our submissions

After collecting the hundreds of submissions and taking some photos, we hit the streets! We gave things to strangers and left them in places for future passersby to find. After about an hour, we could see the tangible evidence of our efforts because people were carrying our affirmations and balloons (made by April’s Twisted Entertainment) around. Color started to overtake the wintery streets! Fells Point is a great neighborhood for doing these kinds of events because of the way the space is set up. It ended up being perfectly timed because that weekend there were some really tragic events in the area. Everywhere always needs morale, but kindness tends to be slightly more appreciated after unfortunate events. Our event was covered on Page 2 of The Baltimore Sun on February 8th. The reporter talked about how some of our efforts weren’t well received, but I want to explain that a little more. With any type of random act of kindness or guerrilla art, you should approach the act the same way you approach giving a gift: without expectation. Once the gift leaves your hand, it’s not yours anymore. It would be great if someone said thank you or smiled back at you, but you can’t control their reaction and you don’t need to. As the reporter followed me around, he witnessed me placing an affirmation into a musician’s bucket that said “You Rock!” He immediately stopped playing, picked it out of the bucket and threw it on the ground saying, “It’s not money, I don’t want it”. That was probably the most negative reaction we had all day, and that doesn’t negate any of the overwhelming positive ones we had! You never know what’s going on in someone’s life that makes them react the way they do. All you can do is continue being nice. There’s actually a whole lesson on spreading kindness in my Self Love E-course. I want to thank everyone who sent in affirmations, who promoted the event, who came out to pass things out, and who received the gifts with grace. The response to our event was so great, two other cities decided to host one as well! Vancouver celebrated in sync with us on Sunday, but you can still send submissions to the London event by February 13th if you missed out! See details here. You can check out the online version of The Baltimore Sun article here, Betsy’s write-up here, and see the entire album of photos that were taken here. And if you want to see things on social media, the official hashtag is #YASVB.