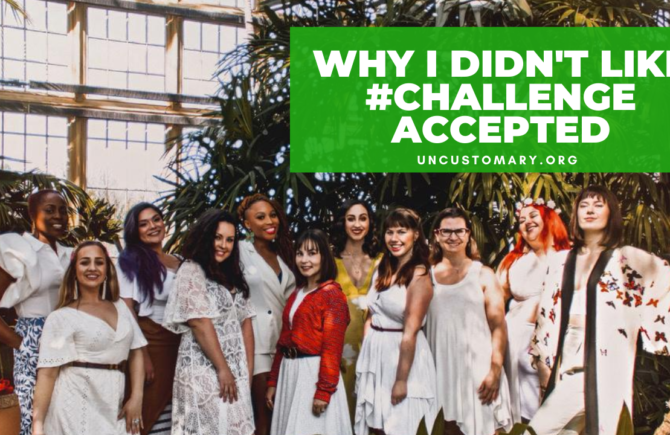 Why I Didn’t Like #ChallengeAccepted; 9 Ways To Support Womxn

To clarify, for those who don’t know, the challenge was simply to take a post a photo of yourself with a black and white filter and tag other womxn in your caption to do the same thing. The idea behind it was to create a massive ripple effect of womxn supporting womxn, but I would like to argue that it actually did something different. I’ll get into that in a minute.

The day the challenge went viral in most places, I posted a link in my Stories to Iliza Schlesinger’s video, which was just one of many high profile people I saw on Instagram talking about why she didn’t want to be tagged in this challenge. We saw eye to eye on a lot of things, including the fact that you don’t need to be involved in a hashtag challenge to support womxn, as well as the fact that “mandatory compliance is not feminism”.

My post also said, “1) You don’t need a damn challenge to support women. 2) If you want to post a photo of you with a black and white filter that option has been available since the beginning of Instagram. 3) Don’t you know I only do rainbows? ;)”

And to put my money where my mouth was, after that, I then screenshot 10 womxn’s Instagram profile’s, tagged them, and wrote what they are excellent at and why I follow them. I followed it with an acknowledgement that it might seem hypocritical to complain about the challenge and then essentially still tag women, but I wanted to prove that I didn’t need a hashtag to support women, a black and white filter, or any prompting.

I got a lot of responses to these posts. Lots of people who realized they felt the same way, love from people finding new bad ass womxn to follow, and lots of positive stuff. I didn’t think twice about it really as I went about my day, because honestly at this point, when I post something, especially when I know it might ruffle some feathers, I know that I’m doing it for a reason and it’s in alignment with my values.

That said, I did receive a message that prompted me to make this video to talk about this further, if only to make sure my message is clear. It was pointed out that to this person I came off judgmental and like a “cool, mean girl”, which had disappointed them because it felt like my post was antithetical of supporting women which is why they liked my message in the first place.

I spoke to them, and explained what I am about to explain to you, and I want to make it clear that at the beginning of posting that Story, at the end of that conversation, and while making this video I have never felt out of alignment with my values or supporting womxn. I do acknowledge that my tone might have come off judgmental or harsh, and I apologize for that. I am going to be more mindful about how words on a page don’t have inflection like you can hear in my voice now.

So let’s talk about the challenge.

Why did I feel compelled to post about it?

The reason I felt compelled to post about this challenge was because I wanted to provide a different perspective on it.

I think often, we are quick to jump on any bandwagon, which is a dangerous game. This is about recognizing that trends are often made to make us feel like activists instead of daily being involved in actual activism or thinking for ourselves. To make us question *why* we’re doing something before hopping on a bandwagon, no matter how benign it may be or seem. It’s about reminding people that you don’t have to commit to a challenge to be involved in activism.

I also think it matters what you do with the caption. For example, one of the only pictures I saw that did something productive with their caption was Jennifer Aniston who reminded her millions of followers to vote instead of just “passing the torch”.

My point was to point to people who didn’t recognize that maybe they don’t need to wait for a challenge to support women, to promote them in their feeds, to post a beautiful picture of themselves, or whatever they want to do.

It was brought into question if this was about attacking “Basic” Womxn?

This has nothing to do with being “basic”. I love pink wine and pop music. I always say if something makes you happy, it makes you happy. It’s why I dislike the term “guilty pleasure”, there’s no need to feel guilty about liking something.

If this is such a benign thing and it’s not hurting anyone, why does it matter?

I don’t care what anyone does, babe as long as it doesn’t take away from anyone else’s safety or freewill.

That said, I am allowed to have an opinion just like you are, and part of my job is to provide insight into self-esteem and perspective and help people examine their choices as to why they might be doing why they’re doing.

If someone doesn’t agree with my opinion they don’t need to do anything with it and keep scrolling, the same way they can do with any of my other posts like if they don’t like magic/spirituality or the way I can do if their black and white trend photos don’t appeal to me.

I have no intent on policing anyone, only to provide a perspective. The thing about the internet is that all opinions posted are pretty much unsolicited because I can’t ask 10 thousand followers hey how do you feel about this. I just post what feels in alignment to me.

PS – If you watch the video, you can learn that it actually was potentially taking away from a movement to end Femicide in Turkey. What do we do now?

Remember how I said that I posted screenshots of 10 womxn I adore with their screennames so people could click through? It worked! Over 120 people have clicked through to check out and follow these amazing people!

Here Are 9 Ways You Can Support Womxn

1. You can share one person a day in your feed!
2. You can support womxn owned businesses!
3. You can vote for womxn politicians, politicians and legislation that are committed to dismantling the patriarchy!
4. You can volunteer for womxn’s organizations!
5. You can make care packages specifically for homeless womxn, including menstrual hygiene products!
6. You can attend womxn’s marches!
7. You can get in touch with your inner feminine through embodiment practices!
8. You can donate to Planned Parenthood!
9. You can always use your voice to stand up for yourself and womxn!

Thanks for listening. I hope this sheds more light on the Black And White Photo Challenge. Remember, hashtags are mini movements, the real movement is showing up every single day!