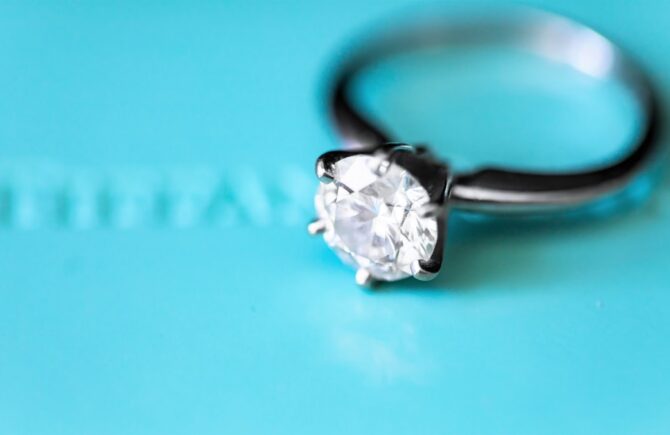 Why Choose Moissanite Over Diamonds?

Would moissanite rings be considered as cheap, tasteless, or imitation? The answer lies in the knowledge that not only is moissanite none of these adjectives, but it is also a completely unique gemstone that just so happens to resemble a diamond. In layman’s terms, a moissanite imitates a diamond, it is not an identical copy.

Moissanite has been around for over 120 years having been discovered in a meteor crater in the late 1800s. Due to its unique characteristics, it is rare to find in nature, but scientists have managed to recreate the gemstone artificially using advanced scientific methods. The process has evolved over the years and with this, the quality of the stones. This makes moissanite a sparkling, spectacular and cost-efficient alternative to conventional diamonds.

Measuring at 10 on the Mohs Scale for hardness, diamond is the hardest naturally occurring mineral. Fractionally softer, moissanite measures 9.25 on the Mohs Scale. Although moissanite is cost-effective, it does not retain value. Laboratory-created diamonds are a similarly economical alternative to mined diamonds, yet these physically and visually identical stones often take preference over diamond-imitators such as moissanite.

Kinder on the environment

Since there is no mining involved, moissanite rings are environmentally friendly. The eco-conscious can happily wear this stone. Moissanite originates from a meteor impact many years ago, and for this reason, due to its rarity in nature, most moissanite we see in jewelry today is artificially manufactured.

Lab-created diamonds offer a cost-effective and brilliant alternative to a natural diamond ring, with less compromise on the appearance, which may be a consideration when choosing a moissanite. We have already mentioned that although moissanite is similar, it still can appear vastly different to diamond, and is often classed as ‘fake’ or imitation. On the other hand, laboratory created diamonds are authentic, and have an identical appearance to mined diamonds. Due to their production method, they boast a much lower retail price point. There is a subtle green, grey, or yellow tone to a moissanite stone which may not be appealing to those looking for the bright, white brilliance of a diamond.

The most obvious difference may be the presence of color – this can be within the stone, and within the fire presented by the stone. While diamonds should appear uniformly bright, and colorless (unless of a lower grade) in all light, a moissanite stone may exhibit a rainbow-like shine, and appear grey or yellow tinted under certain lights.

How do I know a diamond is a diamond?

Genuine diamond is typically cold to the touch and will not gather moisture if you breathe on it. Although most people would not be able to differentiate between a diamond and moissanite with the naked eye, it is always a good idea to consult a gemmologist for an expert opinion.

Thanks to its similarity in appearance when used in engagement rings, moissanite is often mistaken for diamond in a ring setting, in spite of the fact that the stones are not the same. An expert may be able to identify the stone correctly, however, moissanite is easily substituted for diamond, and it is always recommended to check to be sure.