Where Are You Going?

I’ve mentioned that some of my favorite installations to do are interactive. This one is so simple, but it made me really happy to read the results. Oh, PS – if you’re showing this post to a kid.. don’t. There’s a penis (drawing).
Before I went out one night, I taped some brown paper to a small bulletin board and wrote “Where are you going?” on it. I attached two pens and brought some zip ties with me. Before we walked to the restaurant, where I ate tappas for the first time, I hooked it onto the black railing in Fells Point that I’ve used for so many other installations. 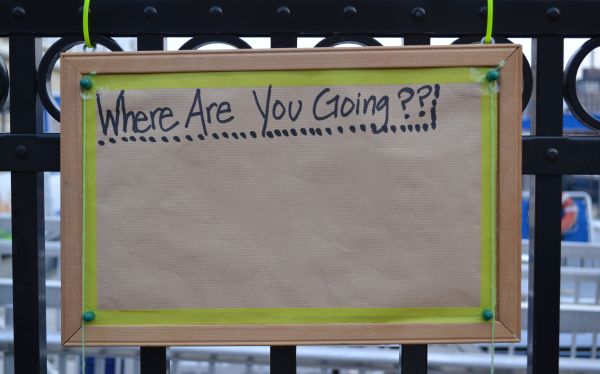 I came back the next night. One of the pens was gone and someone wrote “home bitch” and drew a penis. Other than that, I’m very happy it was still there. Twenty four hours doesn’t seem like that long, but for an installation it’s apparently an eternity.
(I’ve actually been pretty lucky so far, as to not get an absurd amount of obscenities on the things I ask people to write on. I guess “lucky” is pretty pessimistic, but I’m trying to be realistic when it comes to things I gift to the streets.) 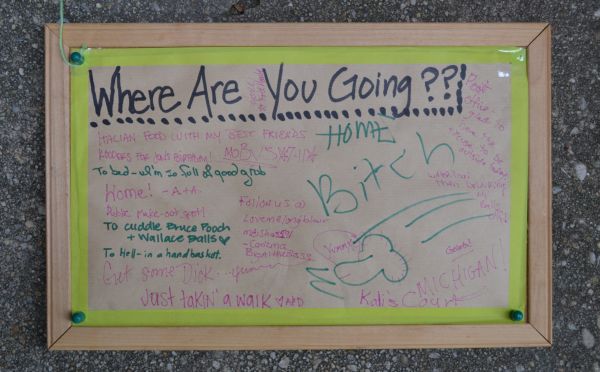 Point being, the following week I used the same bulletin board to ask strangers for suggestions. Less than a day later, it was gone. 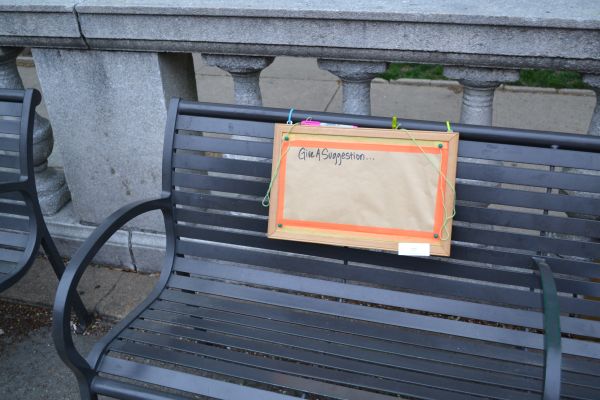 So since that one got stolen, I’m asking you…
Give me a suggestion.
Would you write on a board you saw as you were walking by or waiting for a bus?

In case you couldn’t read what people wrote, here it is:
“Italian food with my best friends”
Koopers for Jon’s birthday!”
“Moby’s 7-11”
“To bed – I’m so full of good grub”
“Home! – A + A”
“Public make out spot!”
“To cuddle Bruce pooch and Wallace balls”
“To hell in a hand basket”
“Get some dick”
“Just takin a walk A & D”
“Post office, glad to have the excuse to be outside today.”
“Water taxi then drinking my balls off!”
“Gelato!”
“Kali’s court”
“Michigan!”
“Home to Fort Meade”
“Follow us @lovemelongblair meishas591 – Carizma Bigaltheboss”
“Home bitch”
“Yummy”