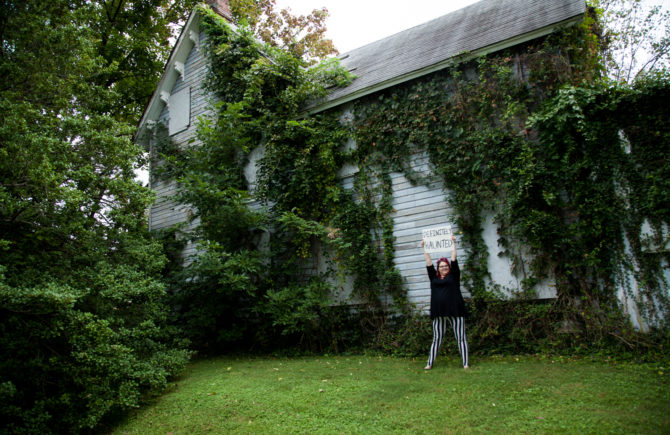 Part of my Friday adventures tend to have a spooky component since Joe and I are both into haunted things, abandoned places, and urban myths. I was pretty surprised when I would post little snapshots of them to my Instagram Stories and get tons of messages from people who said I was leaving them hanging because I didn’t provide enough information! I had no idea my babes were into spooky stuff as much as I was, but I’m so glad! I did a poll and 70% of you believe in ghosts, so that’s pretty amazing.

I’ve decided to do regular round-ups of the more roadside attraction type locations we visit, you can check out the most recent one here, where I promised an upcoming Urban Myth round up. TIS TIME! I’m going to go through five of the Urban Myths we’ve explored, share what I know, and if you have any questions, please feel free to ask in the comments! I’ve also started a “Spooky” Instagram Highlights reel to archive these types of adventures. I hope you enjoy it, and let me know if there’s any additional info I can add to make this better/easier for you!

Keep in mind that due to the nature of these adventures, some of these stories might be triggering. TW: murder, incest, drug use, slavery.

This is locally known as “Hex House”, but officially as Rehmeyer’s Hollow (which is also the current name of the road it’s located on). Nelson Rehmeyer lived there in the early 1900’s. He was a farmer and practiced “white magic”, which he used for healing purposes. He practiced from a book called Pow-Wows Or The Long Lost Friend.

Another local man, John Blymyer had a really rough year (lost members of his family, his job, etc.). He learned about Rehmeyer being a practicioner of folk magic and blamed him for his bad situation. He got two friends together with him, went over to Rehmeyer’s house, tied him up, beat him to death, then lit him on fire. Weirdly, though, the house itself did not burn down! This is believed to be the magic of the story.

Rehmeyer was discovered the next day, Thanksgiving 1928. The three murderers were tried in what became known as the “York Witch Trial”.

The house remains in great condition today. Around 2007 the house was apparently open to the public in some capacity, but this is not currently the case. The house is on its own plot of land and you can pull right up to park and explore. The doors are all boarded up, so you’re not getting inside, but it’s definitely spooky! Locally know as “Devil’s Road”, you’ll have more luck calling this “Cossart Road” if you’re using a GPS. Once you turn down Cossart Road, you’re going to drive for a very long time down a very long, windy road. It’s going to feel like you’ve certainly passed your destination, but you’re not there yet. There are houses and people who live on this road still, pretty close to where you want to go.

The best marker of where you want to go is where the trees bend out from the road. That’s the spookiest part, for sure. So spooky that “The Village” was filmed here! It’s almost like the trees are trying to escape from whatever is in the forest.

What’s in the forest? The remains of the Dupont Family mansion, locally known as The Cult House. Dupont as in the people who made paint! Here’s the thing about the Duponts, though. They were kind of messed up. They wanted their money to stay in the family, so they forced incest and when children were born deformed they allegedly buried them out in the woods on the property.

People who have ignored the “No Trespassing” signs have reported being chased out by black trucks or guards with flashlights. We walked up where we believed the mansion was, and we didn’t really find it. It started to get dark and we were pretty deep in the woods so we decided to turn back. But we did see two very distinct sets of glowing eyes in the distance which was creepy as anything. This is definitely my favorite find on this round-up. On Christmas day in 1983, a drug addict father named Stephen Craig Johnson got high on PCP and other substances and murdered his wife and child, all while believing his child to be a reincarnated version of Jesus Christ. Let’s just say the murders were not quick and painless.

When I first learned about this house a few weeks ago, I saw that an urban explorer had been able to go into the house and found a ton of artifacts that had been left there. It was incredibly creepy. I immediately wanted to go and Maura, Joe, and I got in the car after I did some serious Googling (almost giving up) for the exact location. I’m happy to share the exact location with you below so you don’t have to go through the same hell I did.

We were sad to see all the doors had been severely boarded up since that exploratory video had been published, but I wasn’t about to give up. I found a hole in the back of the house. It was treacherous because the hole was hanging over another pit in the ground, and the place we were entering the house was the basement where the floor was very soft. The house is extremely decrepit and run down. No upkeep has been done since it was abandoned in the early 80’s for sure.

The second floor on the side to the left of the stairwell’s floor has been busted through and trees are growing inside the house. There aren’t really any artifacts left there like in the video we originally saw. But things are still sufficiently creepy and you can see the bathroom, bedrooms, kitchens, closets, stairs, basement, etc. It was definitely my favorite because we actually got to go inside.

If you’re crazy enough to go here, please oh please be careful. Not just with falling through floors but with nails and stuff that can penetrate your skin. Nothing is clean and safe here. Big Lizz was a plantation slave on the Eastern Shore (Maryland) for a man who is believed to have been some sort of smuggler/spy. Big Lizz was believed to be a spy for the Union herself, and her “master” was suspicious of her. He came into some gold and wanted to bury it at Greenbriar Swamp. He took her with him so she could do the digging and bury the gold for him. When she was finishing, she bent down, and he whacked her over the head, killing her and leaving her for dead at the swamp.

The legend says if you go to the bridge where that swamp was originally located (now more of a lake) when the moon is out, you can do a lot of things to get Big Lizz to come out and see you. You can turn your car off, turn your lights on, and honk the horn three times (but be careful, because it’s been known for the car to not turn back on till dawn!). You can also shout positive things to remind Lizz she’s a free woman now and The Confederacy didn’t win.

When we were there I got goosebumps on one of my shoulders and they didn’t leave until we left. Joe saw something move near the tall bushes. We didn’t hear anything, though. There are actually multiple legends of Crybaby Bridges, not just the one we have in Bowie, Maryland. But we’ll focus on ours for now. The idea is there is a half-man, half-goat creature lurking in the woods off of this bridge, “Crybaby Bridge”. Some people believe he was a horrible experiment gone wrong at the Beltsville Research Agricultural Center prior to the 70’s.

Crybaby Bridge isn’t just where Goatman hangs out, though. Crybaby Bridge has a legend all its own. The idea is when you drive over it, your car stalls and you hear the cries of a baby in the distance. When you get out to look, you see an infant floating face down in the water. Stories of how this spookiness came to be are disputed. Some people say a woman and her baby were murdered. Some people say a woman threw her baby in the river.

If you were to check out the bridge between when this post is written and Summer 2019, you won’t be able to drive over the bridge due to construction. You can, however, drive your car up to the barriers and walk about a half mile to the bridge itself. Bring a flashlight!

When we were on the bridge (on Friday the 13th no less), I felt something touch my shoulder multiple times. And some of the pictures we took have very interesting light orbs in them! I even made a video round-up of some footage taken at each of these five locations. Enjoy!

So which one of this round-up is your favorite? I can’t wait to share more of my adventures with you. Stay tuned for roadside attractions, up next!
And if you want to do some weird exploring in your hometown, I strongly recommend checking out Atlas Obscura and Roadside America.