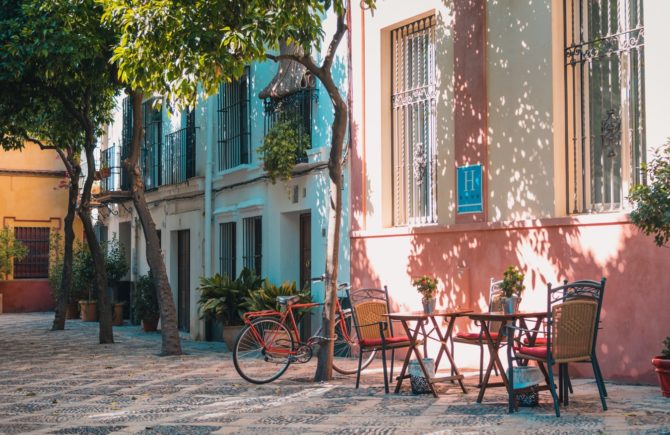 Top 7 Cool And Unusual Things To Do In Spain Buen dia, and welcome to Spain. We have to admit, in addition to all the beautiful beaches, sun, sea, the best parties, the great atmosphere, the wonderful artistic culture, we will single out some of the unusual and cool things you can do if you are visiting Spain.

1. The pink lake of Torrevieja

When looking at Torrevieja from above, it looks as though a colossal strawberry milkshake melted and the gooey mess pooled just outside the city. But the odd sight isn’t caused by a slew of unnatural ingredients. It’s the work of bacteria and algae.

I’ve heard rumors about the goat-throwing but I’ve been there for the tomato pelting. Tomatina is but one festival in this country that has more public holidays than there are days of the year – but, to be honest, the Tomatina is for the young and masochistic.

Far more dignified (and fun!) is the papier-mache festival held each year in Barcelona. Residents from the edgy Gracia district build colorful characters that stand two stories high and float music and sweet treats through the narrow streets of summer.

3. Search for golden letters in Madrid

Madrid’s literary quarter earns its name from the homes of two of the greatest and most influential writers of all time: playwright Lope de Vega and Cervantes, author of the world’s first novel, Don Quixote.

A visit to the literary quarter in Madrid is fun for its tapas and cerveza bars. But you can also add it to your collection of unusual things to do in Spain by seeking out the golden letters that shimmer across the streets.

4. Skate along a riverbed

Riverbed in your way when it comes to ambitious town planning? Simply reroute it and allow residents to skate, run and segway along the groove instead.

That’s what happened in Valencia and this green stretch runs from the heart of the city right to the dazzling sharp white City of Arts and Sciences. Part museum, a part architectural masterpiece, it’s one of the most beautiful and unusual things to do in Spain you can find.

5. Take a flamenco lesson, or see it live

Enjoy watching a Flamenco performance as dancers move to the music

The Spanish love to party and dancing is an integral part of many traditional celebrations. Spain’s national dance is the Flamenco, which originated in the southern parts of the country and has found itself exported as an icon of Spanish life.

Across Spain, you’ll find regular flamenco dancing laid on in bars and restaurants. Many will be more than willing to let a visitor try their hand (or feet) at it! Many of the larger hotels and resorts will offer lessons but more often than not its more fun to sit back and watch the professionals do their thing.

Good to know: If you want to immerse yourself in the Flamenco culture, then head to Seville where you can find many places to see a live performance, along with plenty of places to learn it yourself.

Anyone looking to get an incredible bird’s-eye view of Barcelona, Catalonia, need look no further than the hilltop ruins of the Bunkers del Carmel.

Built as anti-aircraft fortifications in 1938, during the Spanish Civil War, the bunkers atop the hill of Turó de la Rovira were situated so that they could survey the entirety of the city. Large 105 mm cannons were mounted on the concrete and masonry defenses and helped protect Barcelona from further bombing.

After the war, the guns were removed and the bunkers were simply left to crumble. Yet the view from the site was too lovely to stay neglected for long and eventually the old bunkers became known as a beautiful if a bit remote, place to take in the historic city.

In the 2000s, as the popularity of the site grew, the bunkers received a renovation as officials wanted to make it more appealing to tourists as well as celebrate the ancient Iberian settlement that is also nearby. The formerly secret site now regularly sees visitors but is secluded enough that it is often still fairly private. Further restoration of the site began again this year, but the site is expected to reopen in April.

If you are coming to Barcelona, we would recommend a tour of the city by bus tour Barcelona which will make you look more interesting and beautiful to see.

And, the sweetest for the end.

Five hundred years ago, chocolate in the form of cocoa beans first came ashore in Europe. Coming into port in Spain, Hernan Cortes and his conquistadors brought the spiced treat with them after pillaging the Mayan and Aztec empires of Central America, where cocoa beans had been used to create chocolate variants for over 3,000 years.

In honor of this trans-Atlantic transfer, the Barcelona Confectionery Guild has set up the Chocolate Museum to tell the story of chocolate and its modernization. Although the history section of the museum is in no way perfect, visitors get a general trajectory of chocolate’s evolution, moving from bitter water to the stunningly detailed sculptures that fill the museum. By using the statues to visibly depict modern chocolate innovation, the arc of the history of chocolate feels fairly complete.

Upon entrance to the museum, guests are greeted by a massive white chocolate ape named Snowy, along with their own chocolate bar as part of their admission. As they munch on the confectioner’s chocolate, guests walk past glass-encased sculptures made entirely of chocolate. The sculptures include some famous cultural icons such as Minnie Mouse and Louis Armstrong. However, the bulk of work focuses on Spanish architecture, proudly featuring Sagrada Familia, one of Gaudi’s famous houses, and creatures from Parc Guell.

Combining history, the world’s favorite treat, and a small dash of Spanish pride, the museum offers something for every chocolate lover.