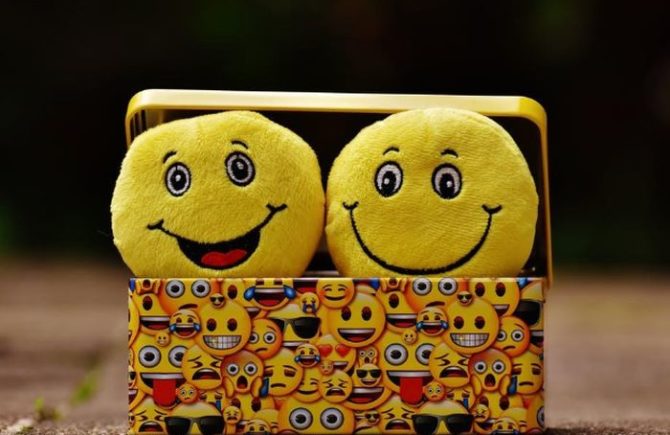 The Evolution Of Emoji. How Did A Smiling Face Replace Our Communication With Words?

Although the art of craving was present in the past, it did not have an impact as the emoji in today’s world.  Emoji has formed a primary dialect that is used mostly by teenagers but also a few middle-aged people are conversant. The conversations around the social network show the impact of these symbols in the current world, where pictures of Emoji represent half of the dialogue Emoji. Their signal created a crucial part in new net speaking conversation.

Emoji has evolved from the 1990s. Japanese artist called Shigetaka Kurita formed the first smiling face. His passion was to come up with a word replacement that could explain the weather status instead of a full statement explaining the same.  He was one of the teams that worked for innovation of the first Mobile Internet Platform from Japan called “DOCOMO”.

The assignment of this Early Mobile Internet Platform was to fashion interesting interface to pass message directly and straightforwardly that could be understood easily. He sampled a group of 12 by 12 pictures elements that picked from the keyboard grid within the mode interface. The selection was sent through personal phones and pages.

Emoji have elevated quickly and became very popular in Japan. The New York’s Museum of Modern Art favored symbols over faces because DOCOMO’s dream was to come up with options to express information. Some samples of Shigetaka’s collection now make the permanent Emoji exhibition at the New York museum. There were characters to show the traffic, (flight, boat, and vehicles), weather focus (falling trees, sun, and rain clouds), innovations (telephones, game kid, televisions) and many more.

As the mobile innovation continued to excel in the 2000s, other competitive mobile companies grabbed the chances to include emoji in other platforms. A Google internationalization software team came up with an idea to demand, requesting to get Emoji accepted by Unicode Consortium in the year 2007”.. Unicode Consortium is an organization that works like the United Nations to preserve information quality throughout computers.

Unicode Consortium focuses on preserving specific codes for language to ensure that every letter typed in English, Arabic or Chinese accurately standardized through networks and gadgets. Google internationalization software team became aware of Emoji’s intonation in Japan and stated to have Emoji fall under the same quality.

Apple designers joined the appeal in the year 2009 and submitted a formal scheme to acquire 625 new temperaments into the Unicode Standard”.. Unicode received the plan in 2010, in a move that would soon make Emoji available everywhere. Unicode eventually decided to lead Emoji due to their use as characters for message sending in numerous Japanese manufacturers.

Unicode did not only maintain quality for Emoji but also ushered-in them as a form of communication. Today, these symbols are officially on track on becoming a formal language. How Did A Smiling Face Replace Our Communication With Words?

Though Emoji has offered a way to express emotions in the visual language, it has also affected changes in our daily communication and usage of words. The study shows that when you see a smiling face in chat, parts of your mind will be triggered the same way they could be triggered when viewing the person in reality. The images of the Emoji and its smiling gesture unleashes your spirit causing your moods to change. The intended message carried by the Emoji to you will be conveyed as you would have talked to the same person face-to-face.

In the expression of gratitude, consider the Australians innovated Emoji that has a smiling face with tears of joy. It has emerged to be the most used Emoji in the said state, due to online assignment help in australia”. lead by Sydney. The Australians used the smiley to represent tears of joy moment of joy. You may lack enough words to express your gratitude to favor received, but considering smiling face with tears of joy, the message is direct to the point and understandable. Unlike verbal communication which requires a lot of words that may appear to be irrelevant.

Sometimes you may also understand the moods of the person at the time when he sent the message even without verbal conversation. For instance, smiling face with a Heart-Eyes represents what the heart feels towards a particular person or something. You may lack enough confidence to express the feeling, but with a Heart-Eyes face, sent to the intended person you are sure the message is conveyed correctly.

The best advantage of Emoji’s language is that you do not need any education to understand the images, unlike a word communication that sometimes requires knowledge of some words used. However, it is also important to note that you may lose your emotional intelligence due mistakable gestures presented by Emoji. For example, Smiling Face with Sunglasses Emoji is mostly used to express the feeling of comfort. It indicates confident, untroubled attitude or something perfect. This message could be very contrary to the real position of someone at the exact time of sending his or her message. In word-to-word communication, you are likely to know a person’s attitude via tone. It is not possible for you to withhold your discomfort towards a specific person especially when he is around you or having a verbal conversation.

The new mind pattern presented by the social networks has eased the way of communication by enhancing the extensive use of images, as one copy can offer a full statement, unlike a word communication that is time-consuming and relatively expensive. It is also important to embrace this new language of emoticon images, as it is becoming a universal language.