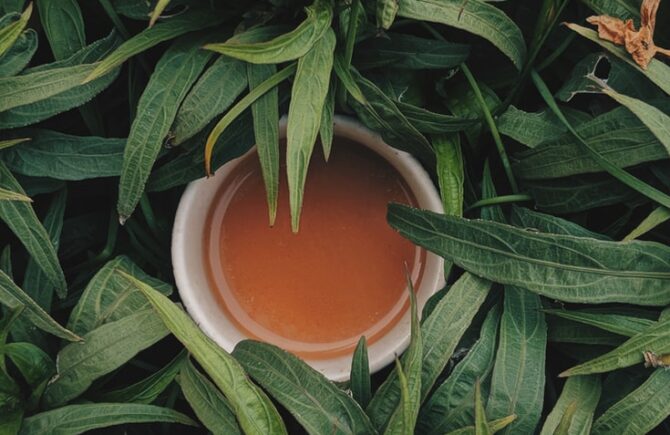 The Benefits Of Making Marijuana Tea

Marijuana can have numerous physical and mental health benefits, but smoking it isn’t for everyone. Thankfully, making marijuana tea is easy to do and confers all the same benefits that cannabinoids can provide.

Some cannabinoids found in marijuana, such as THC and CBD, have pain inhibiting properties that can reduce both chronic and acute pain, as well as potentially reducing inflammation. The pain relieving effects of marijuana tea can take up to 2 hours to take effect, and can last between 4 and 8 hours depending on the strength of the tea.

Due to its long lasting effect from a single dose, marijuana tea is sometimes used by people with chronic conditions such as arthritis and MS, and to relieve side effects of cancer treatments. Marijuana tea and pre-rolled joints are commonly used by people with arthritis, joint pain and mobility issues as it enables them to get the painkilling benefits of cannabis without the potentially difficult and painful task of rolling.

Anxiety and depression are among the most common mental illnesses in America and many other parts of the world. Both THC and CBD are widely reported by patients to reduce their anxiety, improve their ability to relax and help them get better sleep. CBD in particular is used by many people to reduce their social anxiety, stress, panic attacks and other issues associated with anxiety.

Marijuana tea can reduce or relieve these symptoms to an extent that differs from person to person, but it should not be regarded as a cure for them. 47% of Americans in a 2017 survey said they feel cannabis can reduce symptoms of anxiety, stress and depression.

While many people assume that cannabis use has the same negative effect on your lungs that tobacco has, this is not the case. Tobacco is a bronchoconstrictor, which means it tightens the muscles around your lungs, resulting in restricted airways and shortness of breath.

Cannabis, on the other hand, is a bronchodilator. This means the muscles around your lungs loosen, making it easier to breathe. THC, the psychoactive component of marijuana, has also been shown to reduce the size of lung cancer tumors, and slow the growth of cancer cells.

If you don’t want to smoke marijuana or suffer from a respiratory illness, marijuana tea can be a beneficial alternative that helps your lungs.

It’s not just your lungs that could benefit from drinking marijuana tea. While smoking marijuana can temporarily raise your heart rate, drinking it as tea has effects that are beneficial to your circulatory system. In particular, a cannabinoid called AG-2 causes your arteries to dilate. This improves circulation and reduces blood pressure. High blood pressure and poor circulation are leading causes of heart disease and heart attacks.

Nausea is a natural response of the body that it uses to induce vomiting to rid itself of toxic substances. Usually it wears off pretty fast once things have run their course. Some people experience chronic nausea however, due to a long term illness or as a side effect of some medical treatments, such as chemotherapy. It also heightens appetite, which can be a valuable property if you struggle to eat due to persistent nausea.

THC has been shown to relieve nausea and is often used to treat chemotherapy side effects. Numerous studies by the British Medical Foundation have shown that the combination of cannabinoids found in marijuana is more effective at treating nausea than the synthetic cannabinoids available in pill form.

Drinking marijuana tea can help with bowel problems as well as nausea. The most common symptoms of IBS and IBD are painful cramps, diarrhea or constipation, nausea and inflammation. The active ingredients of marijuana tackle all of these symptoms. In addition to being a pain inhibitor, anti-inflammatory and reducing nausea, it is also a muscle relaxant, reducing the cramping and muscle spasms associated with IBS.

How To Make Marijuana Tea

How to make marijuana tea depends on whether you want to experience the effects of THC, the psychoactive component of cannabis.

If you do, you will first need to cook your marijuana in butter or oil to release the THC from the plant matter for 45 minutes at 220 degrees Fahrenheit. If not, you can skip this step. Next, put your ground flower or cannabis oil mixture into a tea infuser or tea bag, along with the herbs and spices of your choices, such as rose, chamomile or cinnamon. Place this into about 2 cups of boiling water and let it simmer for at least 30 minutes before drinking.