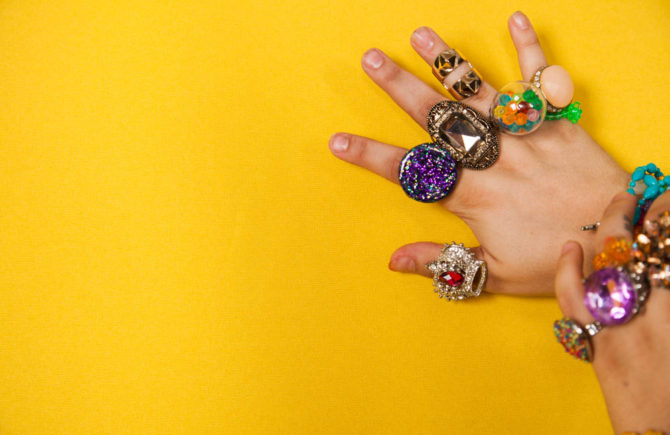 Should You Marry Yourself?

A growing number of women are realizing that they are happy enough with the way their life is and they are ready to marry themselves. Some of these women invite family and friends to the event and even look for assistance from ‘design your own engagement ring from scratch online’ websites so they can create the perfect piece of jewelry to celebrate their special day. What many women may or may not realize is that they are also showing the world that they are not desperate to be married to a man.

Singles of both genders experience pressure when they are not married by a certain age. However, many would argue that women experience the brunt of this pressure. With everything from romantic comedies with endings of two people madly in love riding off in the sunset, to magazine racks full of covers describing tips for creating the perfect wedding, the pressure can be extremely severe.

If you are currently single and over 30, has anyone directly asked you when are you planning to get married? If your answer is ‘no’, you should know that this is extremely rare. Everyone around you is getting hitched, and you are attending all of these weddings as a single woman. You may stick out in the minds of some people, and they may not have any qualms about asking you, “What happened”? So, if you decide to marry yourself instead, will that ease some of the pressure? Will that offer people an alternative when others insist that everyone should have a partner? Or, does it only go to prove that eventually everyone gets married?

What About Happily Ever After?

A perfect day for one person is not the story women were taught when they were little girls. Undoubtedly, the women who make this decision can expect to turn many heads. In fact, do not be surprised if you make your local news. There is something about this option that is very compelling. It is a choice that boldly addresses many of the cultural anxieties regarding marriage, the single life and commitment. Here are some of the questions you should be prepared to answer after you have made the decision to marry yourself:

It is possible that because of these anxieties, hearing about a woman who decides to marry herself is not something you read about every day. There was that one scene in Sex and the City where Carrie decided to create a registry at Manolo Blahnik for herself so she could get a pair of shoes she wanted. Also, in Glee, Sue Sylvester boasted about marrying herself in Season 2 of the television show. She even officiated the wedding and termed it ‘a same-person marriage’.

There are also real world examples of women who have chosen to walk down the aisle alone, no knight in shining armor waiting for them at the end. A Taiwanese woman married herself in 2010. She calmly explained that the pressure she was facing to get married was becoming ‘quite ridiculous’. Another woman in New York was left at the altar by her groom, and she suddenly decided that she was not going to let that spoil her day. While her family and friends were still in attendance, she decided to marry herself. What was her reasoning? She wanted to show herself the love that she had been blindly waiting for someone else to give her. Besides, who wants to cancel a wedding after they have spent all of that money?

Social Culture is Lagging Behind Behavior

Although social and popular culture is still holding on to the thought that everyone should get married and there is someone out there for everyone, unfortunately, society’s behavior does not match these ideals. As a matter of fact, recent studies conducted by the Pew Institute concluded that only around 50 percent of adults in the United States are married. This is a very sharp decline from just 50 years ago when over 70 percent of adults over the age of 18 in the United States were married.

There are a vast number of reasons why people are delaying or even forgoing the declaration of their love to another through the exchange of rings and vows. Whatever these reasons are, there are a growing number of adults who are not as excited about the prospect of marriage as previous generations.

There are some experts who believe they understand the increased desire for women to marry themselves. Marrying yourself is becoming another rite of passage or coming of age ceremony that is taking the term ‘rites of passage’ to another level. For these women, this ceremony is about more than simply having a ring, getting some items they wanted from a wedding gift registry or being an attention seeker. Instead the sentiment that most of these women share is that they are expressing a commitment to love and care for themselves in the same manner they would have wanted a spouse to.

Self matrimony has also been touted as an interesting solution for many women already in a relationship. They sacrifice their personal needs when they are in a relationship with someone else. For these women, self marriage may possibly be a radical gesture in not only learning to love oneself, but to also make a bold statement on how women are often treated in traditional relationships.

Critics Give a Warning

Critics of self marriage understand the woman’s position on this touchy subject. However, they also believe that it could lead to additional issues if it becomes a trend for women to marry themselves. They believe that this concept is an extreme example of how individualism in America has gone wrong. They also believe that marriage is a fundamental social institution that has been around for centuries, crossing cultures and also historical epochs.

Marriage is a concept that focuses on two people creating a life of love together while establishing a community. It also contains the three important C’s – commitment, compromising and communicating. Along the way, the two people may also share a journey of parenthood together. Relationship experts believe that if you are not able to create this type of community through marriage, children are likely to be the ones who suffer. These experts also warn that women who choose self marriage need to understand that no matter which term they use, they are still single.

Conservatives, generally proponents of two-person marriage, believe that if the deterioration of marriage continues with declining marriage rates, a breakdown of society as we know it will be the result. With national conservative groups debating about what the legal definition of marriage is, these conflicts only further justify, in the minds of many women, that self marriage is the only option for them.

While conservatives continue to push the narrative of traditional marriage and television attempts to paint a rosy life for every scenario, the reality is that most people are living their lives in a completely different way. The institution of marriage is playing a completely different role in the lives of singles than it did several decades ago. There are many other options available to women including:

There are many who do not see the need for self marriage because they do not believe that everyone needs to have a ceremony or get married at all. For example, if self marriage is so important, is there something wrong if you are okay with being single? Or, does self marriage delegitimize what many consider single life to be, a legitimate lifestyle? Isn’t the reason many people are single a choice so they can move away from those outdated traditions that typically revolve around marriage? Should single women really begin to fight to preserve the one thing they all have in common? Maybe there are women out there who are unapologetically unmarried, single and do not view themselves as being ‘incomplete’.

Although marriage rates are on a steady decline, there is a pressure to get married that remains very real. While self marriage is not seen as a legal partnership, ideas are slowly changing. Time is chipping away at how women view themselves, and how they love and have relationships.

Every day, people come together in holy matrimony, and there is still an enormous amount of societal and emotional pressure for single women to marry. The very fact that marriage is still making headlines further proves that this fundamental institution is not as cut and dry as most people want to believe. There are still a significant percentage of people who feel the pressure of getting married, and those who do not feel complete without it. When considering this type of pressure, many see women who choose self-marriage as courageous.