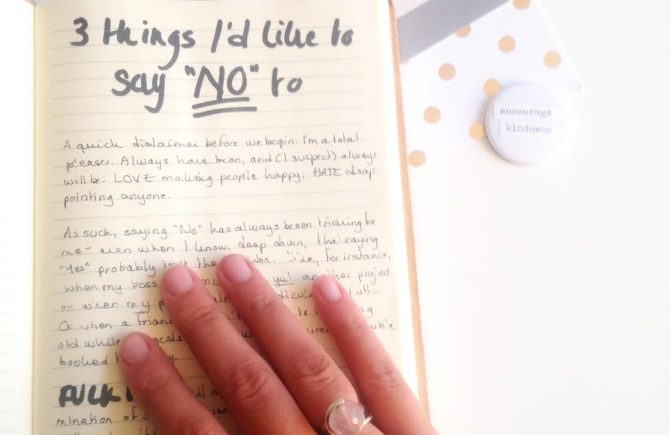 Self-Love Prompts: Three Things I’d Like To Say No To

Self-Love Prompts is a series I started after creating a list of 50 self-love writing prompts. People like you select a prompt that speaks to them, work on it, and send me their response so I can share it with you guys!

We’re continuing on this journey with the fabulous Jessica of Jessica Says. I’m so happy to have such an amazing advocate for self-love talking about it here with us on Uncustomary. Today she’s going to be answering the prompt: “Three Things I’d Like To Say No To“. A quick disclaimer before we begin: I’m a total people pleaser. Always have been, and (I suspect) always will be. LOVE making people happy; HATE disappointing anyone.

As such, saying “No” has always been tricky for me – even when I know, deep down, that saying “Yes” probably isn’t the best idea. Like, for instance, when my boss asks me to take on yet another project when my plate is already ridiculously full… Or when a friend I haven’t spoken to in a long old while suggests brunch when I’m already double booked that day.

Fuck it, I tell myself with the steely determination of someone used to this tired old farce. I’ll make it happen.

The result is always a bittersweet mix of shitshitshit what am I gonna do and YES, I bloody well did it. Invariably, though, the sheer stress of having ALL of the balls up in the air at the same time always supersedes the rush of endorphins from a job well done, leaving me in a broken heap on the floor. (I’m barely exaggerating.)

And yet, I never learn! People pleasing is a drug, yo. Even though the high is never as good the second, third, fourth, nth time around, it somehow still feels worthy of pursuit…

Until, that is, you’re on the verge of a nervous breakdown and your besties host an intervention to save you from yourself. (Yeah, that has a way of shedding light on how ridiculous a situation is.)

Without further ado, here are three things I’d like to say “No” to for the remainder of the year. Accountability and support in the form of wine and chocolates are very much appreciated.

Being mean to myself.

For someone who started out as a body positivity and self-love blogger, I sure can be mean to myself sometimes. It’s not that I consciously do it – I don’t sit in my own head and berate myself all day, errryday. It’s more of a passive aggressive thing… Like something waiting the dark, biding its time until my defences are down.

It may not seem like much at the time – these things rarely do because they happen in split seconds, almost like an afterthought – but unkind thoughts build up, forming layers upon layers in the recesses of your mind until you end up not liking yourself very much.

I’m saying “No” to my inner mean girl. Enough of this self-criticising bullshit.

Doing things I don’t enjoy because it makes other people happy.

This is easier said than done, of course, because there’s always going to be a close friend’s birthday party you don’t feel like going to or your boyfriend’s band’s gig at the local dive bar. Sometimes, you just gotta suck it up and do the thing.

And that’s okay – as long as it’s people you truly care about, and things that don’t make you hate yourself. I’m not that great at making that distinction, and often I’ll find myself accepting invitations I’m less than thrilled about when all I really want is to chill at home with a glass of vino.

From time to time, that’s fine; it’s when your schedule fills up with these pointless people-pleasing missions (‘cause that’s all they are) and you find yourself with less time to do the things you actually want to do and you become bitter and resentful and snappy and awful… That’s when it’s not ok.

For the rest of the year, I want to tune in and learn the difference. I want to say “Yes” to things (and people I love), and “No” to the rest.

Being afraid to be on my own.

Maybe it’s an ENFP thing, maybe it’s an only child thing… I honestly couldn’t tell you. What I do know, though, is that spending “too much” time on my own makes my skin crawl. (In air quotes because what the hell is “too much”?)

I think what it is, is being alone with myself means confronting my thoughts and feelings. At some point, I’m going to run out of shows to watch and books to read and things to fill my brain and, well, then I’ll actually need to spend some time with myself.

And for someone who’s always on the go, always doing something, always helping someone, always numbing…

They say growth happens outside of your comfort zone and I believe that with every fibre of my being. It’s when I’ve been uncomfortable that the biggest changes – evolutions – have occurred, so feeling uneasy about something usually means I’m going in the right direction.

Because I want to honour that feeling, I’m saying “No” to being so damn scared of being on my own and saying “Yes” to learning to savour my own presence.

I’m often told I’m a lovely person; I want to learn that for myself.

“No” is so much more than just a two-letter word; it’s about reclaiming your power, setting boundaries for others and yourself, and holding space. It’s also about being kind to yourself.

What will you say “No” to today, so that you may say “Yes” to what really matters? Jessica Johansen is a digital marketer, consultant and writer who helps bloggers and creatives make their big, beautiful dreams come true without tearing their hair out. She’s passionate about finding time for plenty of play while rocking her biz, Jessica Says, like a badass. Find her on her blog or Instagram!

Are you interested in being part of the Self-Love Prompts series? Select your prompt and send me an e-mail so I can give you more information!