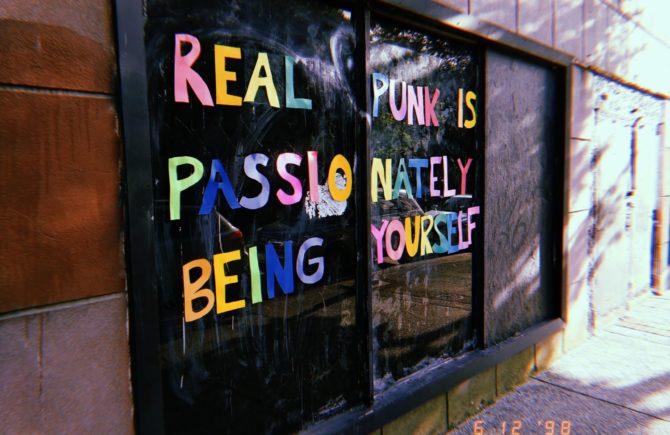 It’s been a long time since I’ve dated someone who is into punk music/culture. And the last time I did, I didn’t appreciate it nearly enough. I love the utter hell out of my friends now, and I wouldn’t trade them for anything, and while we all have some overlapping musical tastes, it’s pretty random across the scene. And punk barely creeps in there. I’ve been to one (count it, one) burner party where they were playing punk music and I yelled, “WHO IS PLAYING THIS?” hahah.

Anyway, punk is about so much more than the music. I like going to punk events these days because I dress like myself and I stand out like a sore thumb, but I’ve always said that it would kind of be the antithesis of what punk is about to dress in denim and black just to attend an event so I could fit in with the “punk” trope. That’s silly. I was talking to the guy I’ve been seeing about it recently, and how to me punk is about passion and just being authentically yourself, whatever that means to you. And standing also standing up for what you know is right and helping others do the same. He responded back with this quote by Joey Ramone:

For me, punk is about real feelings. It’s not about, ‘Yeah I am a punk and I’m angry. That’s a lot of crap. It’s about loving the things that really matter: heart, passion, and soul.

Couldn’t have said it better myself! I wanted to turn these feelings into a guerrilla art installation, but instead of quoting Joey Ramone directly, I made up my own phrase and cut it out in fluroescent neon letters that I taped up to some blacked out windows on Eastern Avenue in Fells Point. “Real punk is passionately being yourself” Listen To My Podcast Episode “Punk Is The Ultimate Self-Love”

In true screw the man fashion, a city employee came up to me and told me he was going to take it down. I told him he would have to wait because I wasn’t done and I was at least going to get a picture of it before he tore it down. Sure enough, I came back later and it was gone. But that’s the beauty of impermanence, my friends. And we have these photos to remember it.

What do you think punk is?