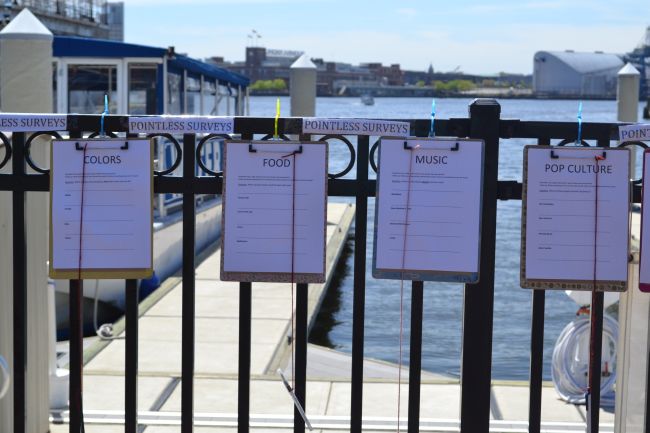 Sometimes I ask people very specific, but random, questions. I’ve been doing it forever. In high school I had this thing called “Question Of The Day”, and I would come up with a question in first period and take tally marks all the way until the end of the day. People loved it then, but now they tend to dislike that I have no follow up with my questions.

A good example is once at work I asked everyone: “If you had two clear containers for your shampoo and conditioner, with no labels, and the only difference was the caps (blue and green), which would you put conditioner in?” There was no right answer, and it turned out that most people had a different answer than I did. I’m just interested in what people think about things like that.

Anyway, I decided that I would turn this interest of mine into an installation, and that I would be completely  up front about the lack of purpose. So, I bring to you: Pointless Surveys.

I created nine questions, each with four multiple choice answers. I put them each on a clipboard that I decorated with washi tape, attached a pen and instructions, and hung them up on the fence I’ve used for so many other installations. 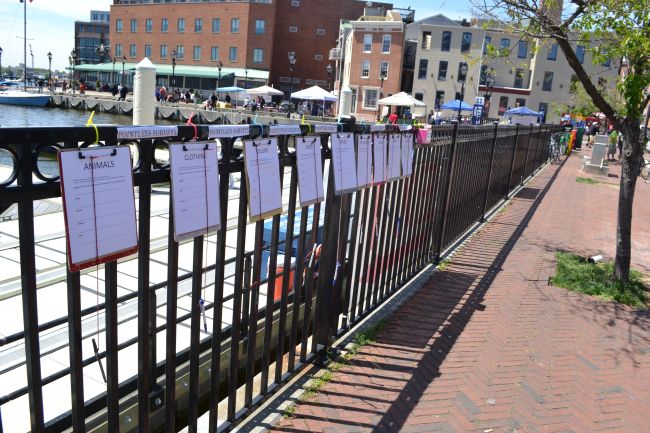 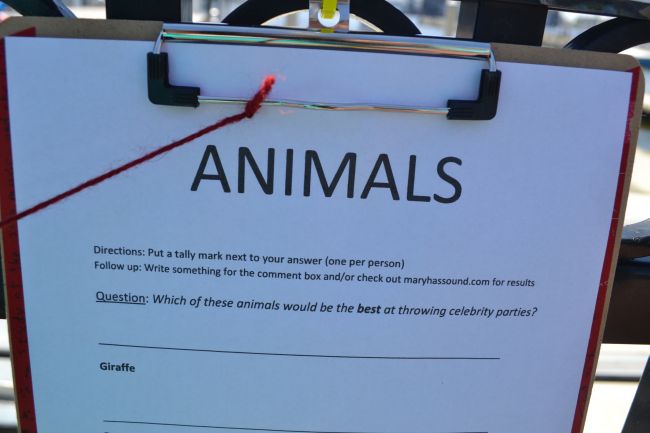 There were nine different “categories”, each with four multiple choice answers. They are listed below, with the answers ordered in descending popularity.

Animals
“Which of these animals would be the best at throwing celebrity parties?”
Peacock, giraffe, parrot, chipmunk

Clothing
“Which of these fashion trends do you wish would stay the longest?”
Jeggings, slogan T’s, Uggs, cuff bracelets
* Someone wrote in “yoga pants” and people used that as an answer, which blew the rest of the responses out of the water

Colors
“Which of these colors would you least like to have your car be?”
Olive, orange, yellow, white

Food
“Which of these foods sounds the best right now?”
Funnel cake, corn on the cob, Oreos, applesauce

School
“Which of these subjects would you take again if you had to?”
US History, Algebra, Physics, Chemistry

Travel
“Which of these cities do you think it would be easiest to not get arrested for climbing in a fountain?”
Portland, Orlando, Chicago, Richmond

Work
“Which of these jobs would you pick if you had to wear a bow tie every day?”
Dog groomer, bus driver, massage therapist, mechanic
* Answers also added: Mortician, Chip N Dales

I also provided a comment box with paper, in case people had things to add. Apparently that wasn’t enough, and people really just wrote all over the surveys themselves. (I didn’t really think about the fact that the drunk crowd would be roaming through later that night.) 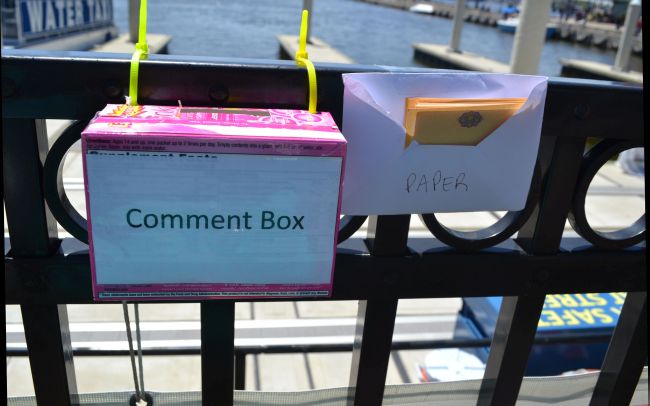 People did use the comment box, though. And here are some of my favorites:

“You guys are so awesome it’s not even funny.”

“This was fun. Thanks for asking my opinion.”

“I love it here! I had fun. Tonight was my night.”

“This is awesome. Caught my eye right away.”

“I like  peaches. Peaches come in a can. They were put there by a man in a factory downtown.”

“You made me smile!”

“Very cool and fun survey! Thanks”

“Neat surveys for the drunk and disorderly”

Something that’s really exhilarating and peaceful for me (all at once), is to watch something I’ve installed in action. I creepily took pictures of people writing their answers. Then, I got a burrito and sat on a stoop to watch even further. It’s one of my favorite things. 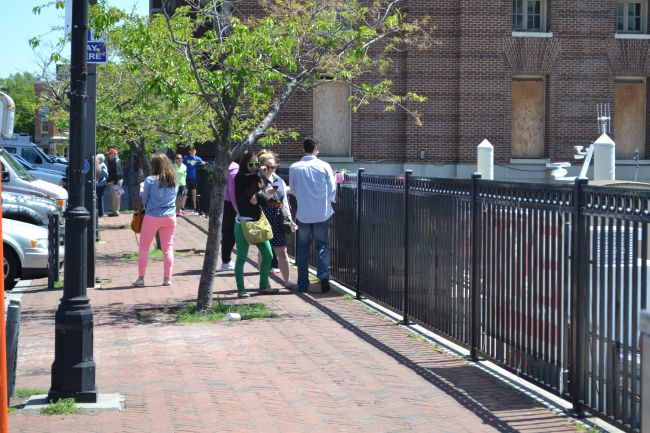 Feel free to tell me your answers to one or all of the questions.