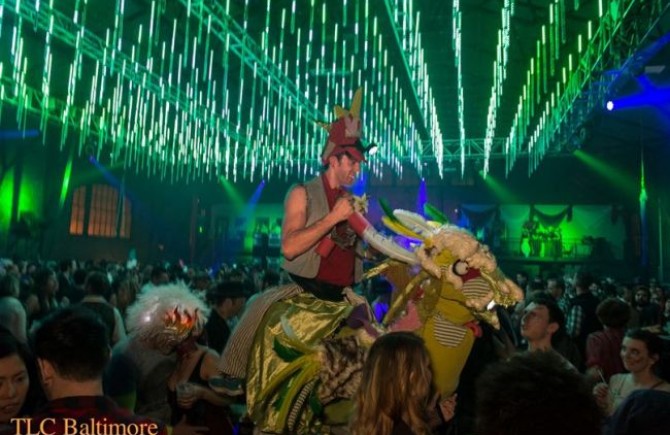 How did you celebrate Valentine’s Day this year? I’ve never been one for the basic mushy stuff, but Joe invited me to come with him and his friends to The Philadelphia Experiment’s 8th annual Heartburn event at the 23rd Street Armory. I really knew nothing more than what was on the flyer, but of course I said yes. It seemed like it was just a giant party with an 18th Century Paris theme on Valentine’s Day, so I was in! 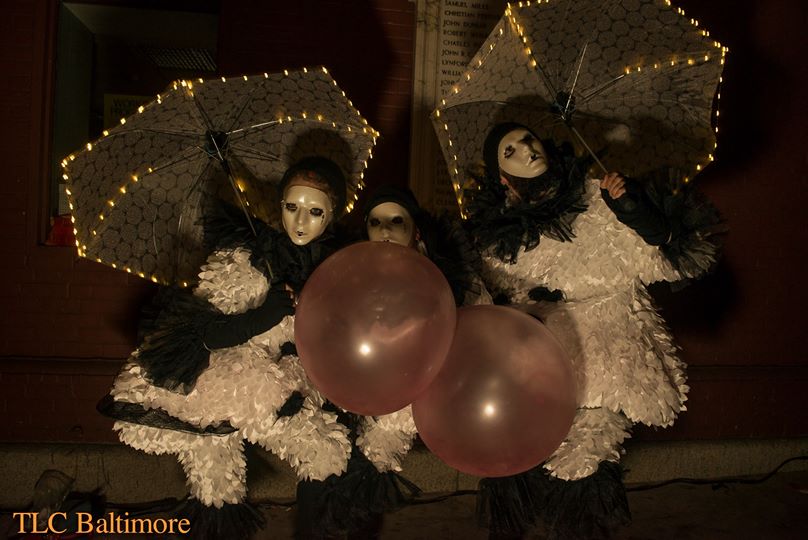 I truly couldn’t have asked for a better time. When we got out of our cab, we entered into a foyer where three people in elaborate costumes (made by Eric Wagner) moved around with umbrellas and threw very malleable balls at us. Mesmerized, we slowly made our way to present our tickets, get our commemorative pins, and enter the coat check line. As we stood in the queue waiting to drop our coats off, I was completely entranced by the lighting on the ceiling. Hundreds of icicle lights, lit up with the music as people poured onto the dance floor. 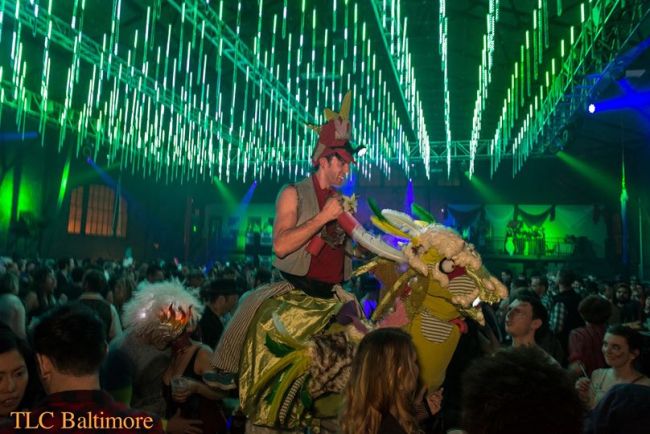 There were a lot of people already there by 10 pm, but by midnight the entire place was packed. The main floor downstairs was full of party-goers in elaborate costumes ranging from Harley Quinn/Joker-esque themes to Marie Antoinette to mustard bottle outfits. There was even a guy (James Ryan) on stilts operating an amazing puppet. Everyone was all having a great time watching the performers swing on aerial fabric, hula hoop, and fire dance.

This was my first real Burner party, but it seems like it ended up being more like Burners at a rave instead of an actual burn. One way that was made evident was the way that people didn’t clean up after themselves like they would at something like Burning Man or Playa Del Feugo. (Although to be fair, there were a severe lack of trash cans spread around.) 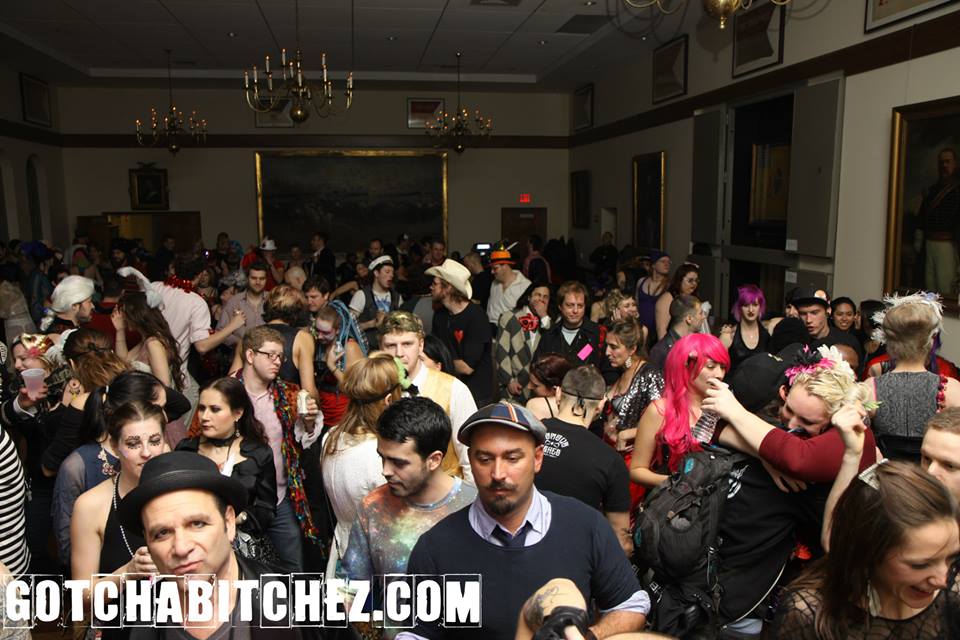 [You can see me on the far right, taking a break around 2 am]
Photo Credit: GotchaBitchez

The third floor was similar, but smaller. It had a giant projector screen on the wall flashing colorful patterns as the DJ played music you couldn’t help but move to. The second floor was full of actual showcases of weaponry and relics that we were all very impressed by. We had no idea how Burners secured this incredible venue, but we were all really grateful. That floor was much more relaxed, though. It was kind of where you went when you needed a break. 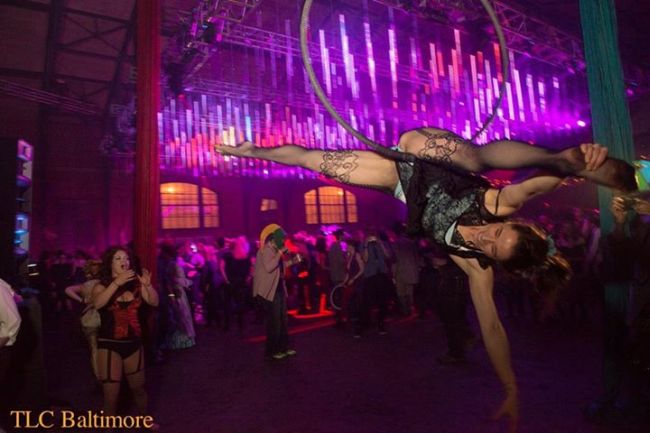 There were so many people there they actually ran out of water, but that didn’t stop us from partying. I met a horse I named Claudia, proclaimed that we must definitely get cheese curls after we got home, and met a man who let me wear his balloon hat. Our group size ebbed and flowed throughout the night, but by 3 am when the music finally stopped and they started sweeping up the floors, we had all found each other again. Good thing, too, because apparently the giant igloo that was holding all of our coats kind of collapsed and it became a free-for-all. 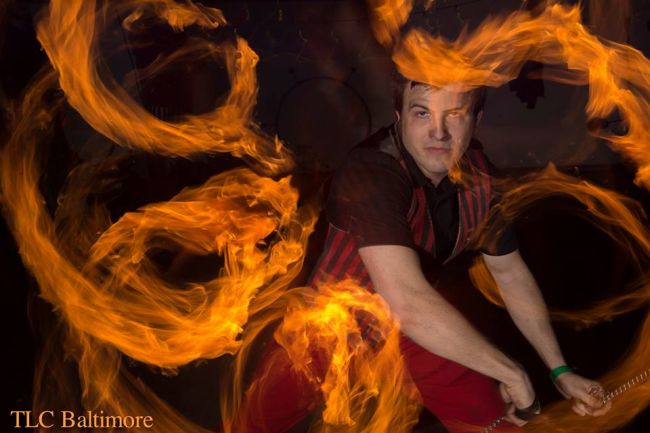 You can see a full 24-hour time lapse of the set up, party, and break down in this video. If you pause it at 4:00 exactly, you will see our group figuring out our next move at the bottom left of the screen. Our next move ended up being the after party that everyone had passed out stickers for throughout the evening, and that was an adventure in itself.

24 Hours of Heartburn VIII from BEW Productions, LLC on Vimeo.

We braved the temperature and wind outside to get in a cab (I swear it must have been negative forty five degrees Fahrenheit) and made our way to a slightly sketchy area of West Philly. When the GPS said we were there, we saw a man standing in an open threshold of the bottom floor of a building and carefully commandeered the snow and ice to make our way to him. We walked up two flights of dirty concrete stairs and got to a landing where at we realized the above floors were roped off. All that was there was a mini balcony, and we immediately thought it was some sort of elaborate prank. All of a sudden, two guys came off the balcony and told us to keep going. We pounded on a giant door and entered an empty room the size of a city block. I swear it was like a movie. We walked to the end where there was a desk lit up by red heart lights and paid the cover. 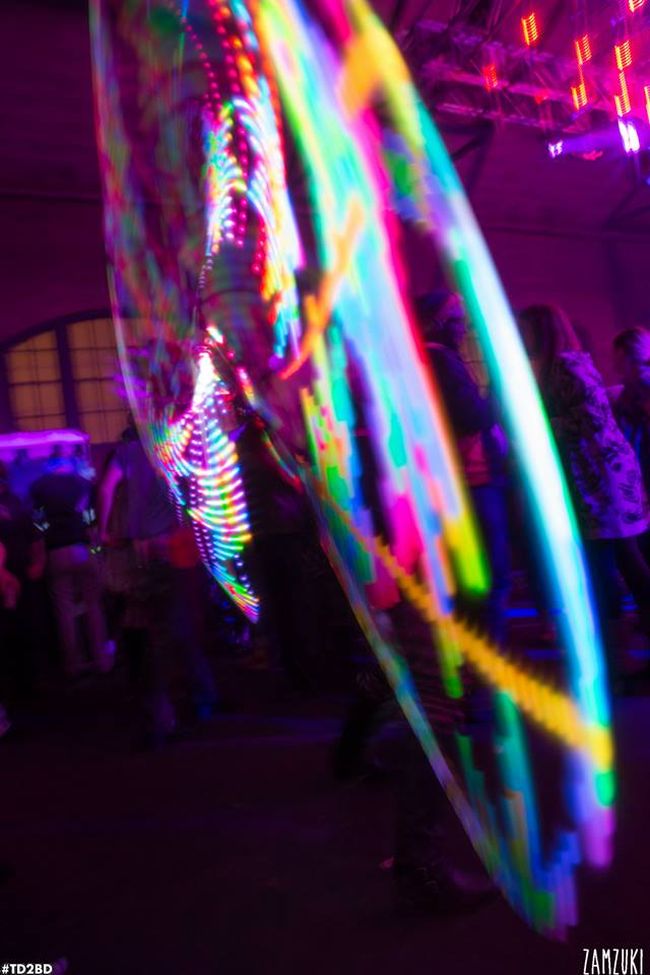 Inside, we re-hydrated and saw a mini cabaret show before moving to the black light room which was extremely trippy and visually stimulating. There were tents with spinning lights and textures, and random things were glowing all over the place. We never really made it to the dance floor because we realized how long the line for the bathroom was and decided it would be more fun if we just headed back to the hotel to hang out. 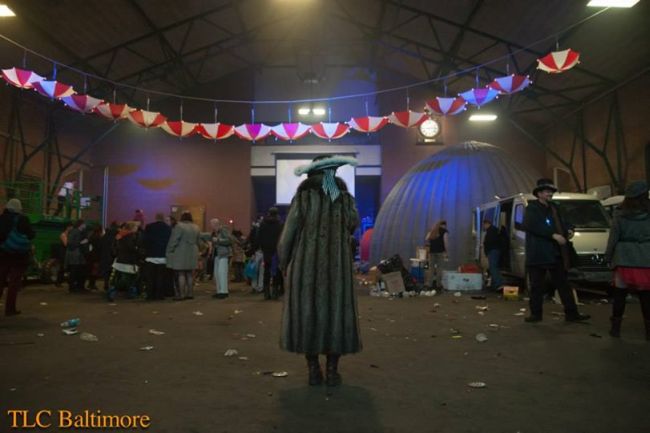 [you can see me and Joe in the left middle, blue and black/white jackets]
Photo Credit: TLC Baltimore

We had originally left the hotel for the party around 9:30 pm and Joe and I retreated back to our room by 8 am. I don’t know how to explain the feeling I had when I took off my corset after eleven hours, but it was amazing. The whole night was, actually. I remember walking out of The Armory at 3:30, into the frigid tundra that was 23rd Street and sliding my hands into my pockets. There was nothing in my pockets since I hadn’t brought anything with me, and I realized in that moment that I didn’t actually need anything else. I was having a blast, and I didn’t want to be anywhere else. 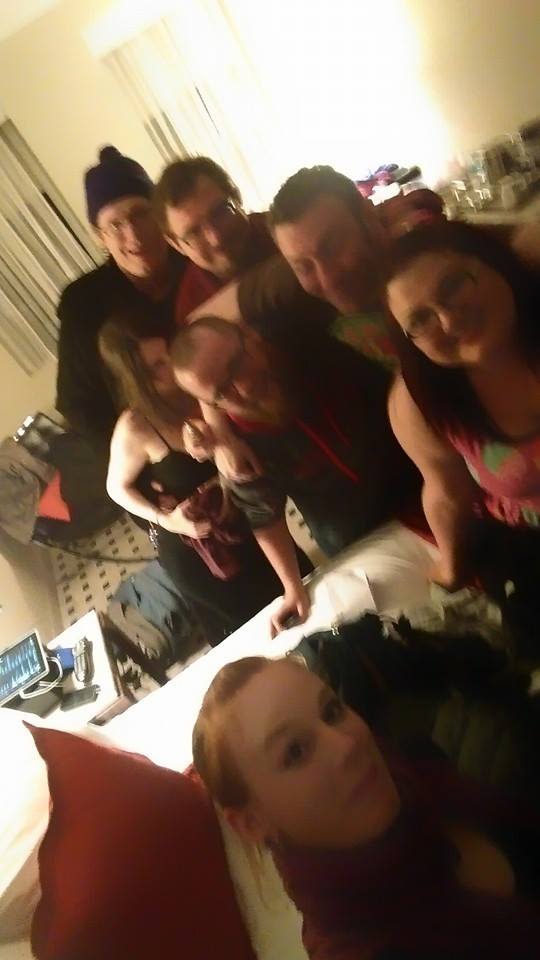 Thanks to Joe, Maura, Jason, Steve, Stu, Zoe, Daniel, Brooke, and Mike for driving to Philly and partying with me. Thanks to everyone involved in making the event happen, including the performers (like David London!), security, DJs, and volunteers. And thanks to the photographers who documented an evening I was too busy living.

See more photos on the event page, TLC Baltimore, Gotchya Bitchez, + There’s Drinking To Be Done. You can also see a close up of Joe’s and my outfits on this week’s happiness post.