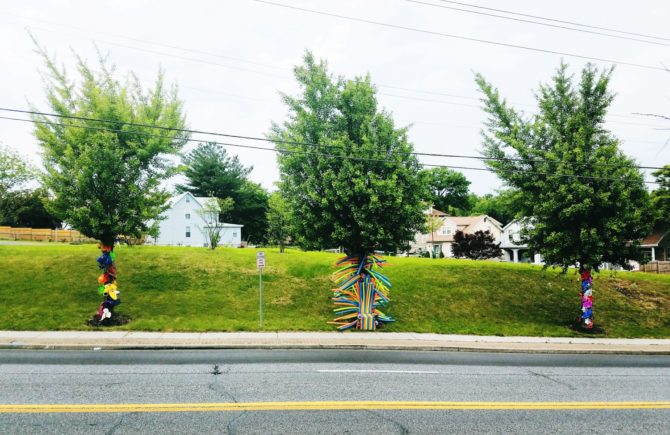 It’s always so interesting the way things happen. They say you’re a gajillion times more likely to get a job if you know someone who works there, and they’re right. Word of mouth is so powerful, and sometimes things fall into place in such weird ways! For example, my friend Susan was at her restaurant and overheard a woman talking about decorating trees, and she casually mentioned that her friends (April and I) do street art and can do things like yarnbombing to trees and would probably be super interested in being commissioned to work on her project. She gave her our contact information, and before we knew it, we were talking to Carol who runs the Overlea Artsfest in northern Baltimore off Belair Road (at the Natural History Society museum).

She told us that every year they’ve been doubling their turnout, and pretty much all their events are inside, but this year they really wanted to not only get more people interested in the hype/event, but actually put stuff outside to promote it. Right outside were five really tall trees all in a row along the sidewalk, and she wanted to decorate them as an art installation that also served as an attention grabber.

April and I were immediately overflowing with ideas, but because this idea was kind of late in their planning they unfortunately didn’t really have much of a budget for us to work with. We told ourselves we’d keep it simple and work within our means, but as April put it, when our names are attached to something we want to make sure it looks good so we end up going to whatever lengths necessary to make that possible, even if it means going out of our own pockets which we definitely did. I honestly had a really great time doing it. I love working with April, I love street art, I love trees, and there wasn’t too much foot traffic in the area so we weren’t very bothered. It was a peaceful install week, and we went to town with themes. The first tree I did was an interactive one where I attached a bunch of photobooth props on strings to a sign that said “Stand Here & Smile”, intending for passersby to get their photo taken in front of the tree using the props. The other tree I did was mermaid themed, where I basically created a long, blue fin and added things like seashells, twinkle lights, rope, and other accessories to make it as sea-like as possible. April got a bunch of pinwheels and hanging decorations from the dollar store and hung them from the tree with the lowest hanging branches, and covered the trunk of that tree with shiny metallic bits. Her other tree was the hit of the whole thing, where she created a throne out of foam pool Noodles that you could actually sit in! Is she incredible or what? Then, for my favorite tree, we collaborated and went to thrift stores and got a bunch of interestingly shaped junk that we spray painted in solid ROYGBIV colors. Then, April affixed them in rainbow order in a spiral motion winding up the tree. In front, she found this old man plushie who we had reading a book. It was pretty kitschy nonsensical, and I was obsessed with how it looked. [Before any of you yell at us for ruining nature, it should be mentioned that they’re planning on cutting these trees down because they aren’t indigenous to Maryland and aren’t faring well in our climate, which is partly why they decided they’d be a good canvas for art.]

Carol and her husband, George, were very helpful with us getting things set up. George took a time lapse video of us installing the first day, and even popped by one of the nights we ended up staying super late to knock stuff out to interview us. The event went well, and the trees were a hit. Besides inclement weather, they were barely tampered with, and remained up for about a month before we were asked to uninstall them. It’s possible that next year the festival will have a full grant for us to work with for some kind of installation, which would be fantastic! April is so creative and easy to work with. I’d definitely be interested in going back if we could get money for some awesome supplies! Thanks to the Overlea Artsfest for this opportunity.