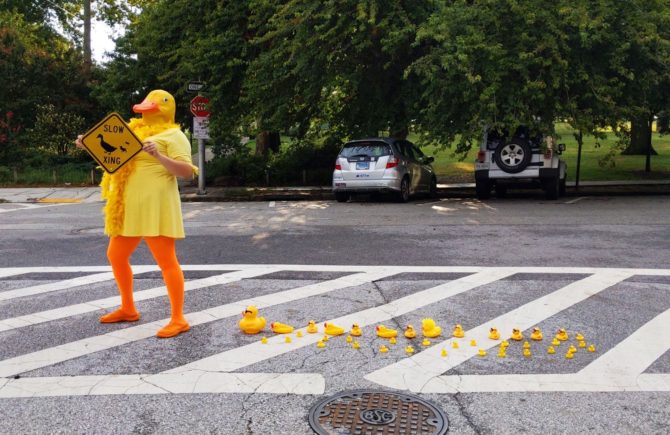 I don’t know if you’ve noticed, but in the past year I’ve become pretty obsessed with ducks. It all started with this pair of ducks that just wander our neighborhood. There is no water to be found. They just moved to Baltimore and love it here, and I feel that. Sometimes Joe would run to Royal Farms for me and see the boy duck (I named him Georgette) outside the RoFo and say, “Aw, he’s getting something for his girlfriend, too!” (I named her Henrietta.) For a while we didn’t see them, and I literally cried because I was so worried about them. But they turned back up! They’re just a little more aloof now. So I knew in my next photo series, I’d have to pay homage to the ducks that got me so obsessed with their species. I mean, we have stuffed animal ducks, duck calls, and we even made them a pool in case they want to swim! And as you can see, I also now have a duck mask and crossing sign (since this photoshoot, Joe has made a stand for the duck crossing sign and it stands outside our house). This photoshoot drew quite the crowd. Just a mama duck walking across the street with her baby ducks. I got to meet a lot of local people and tell them about our neighborhood ducks. Many people stuck it out through the photoshoot (it took a while, I’m clearly blocking an intersection). And at the end the kids got to each take a duck home! (I got permission from their parents to post pictures.) DUCKS ARE SO HOT RIGHT NOW!