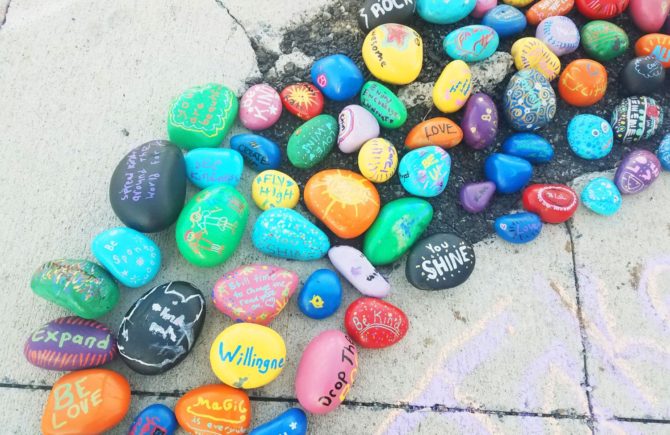 The Kindness Rocks Project is rocking the world (pun intended), and I wanted to host an event in Baltimore to join forces, decorate rocks with beautiful colors, drawings, and words and leave them out for strangers! The project began in Cape Code a few years ago, and has spread rapidly throughout the world. This is definitely not the only painted rocks group in existence, and you can very easily find one in your area just by searching on Facebook. There was a painted rocks group for Baltimore and for Maryland, but they weren’t official through this project, and either way I still wanted to get people together, specifically on a day that’s kind of infamous for being unkind: Black Friday. Black Friday is a day where we see behavior that makes our jaw drop in horror, and I wanted to facilitate an activity that fostered the total opposite feeling of that. Not gimme gimme grabby grabby screw you feelings, but let me take this day I have off and spend it being creative and making something that I’m not even going to keep, but plan on leaving for someone I may never meet and hope it makes their day a little brighter. Beforehand, I got three large bags of smooth river rocks from Lowe’s, and spray painted them a base color (10 different colors). I used a mix of matte and glossy. Matte works best, but you can make glossy work. There were over 300 rocks total, and with them I also brought a bunch of oil-based Sharpies that you can purchase at any craft store. The only other things I brought to put out on the tables were lists of inspirational words as starting points for people with writer’s block, general instructions/overview of the project, and some free stickers and postcards. I rented space at R. House, a really cool indoor marketplace in Baltimore, and we squished together a bunch of their “family tables” to get to work! There were plenty of people who heard of the event and came on purpose, but what was really cool was we had a ton of people wandering by and interested in what we were doing, ready to participate. After doing guerrilla art for five years, I’m used to having to explain that I enjoy doing things other people might not innately understand and/or respond to confused or negative comments like, “You have too much free time” or, “…but…why??” But this was the first time in my life that I had zero people ask anything even close to that. This activity appeals to everyone, and it’s so beautiful. I had people from ages 2 to 80 participate, and it was really life-affirming. I think something else that’s really great about this activity is it’s not really intimidating. The rock is already a pretty color and the pen writes smooth and dries quickly, so as long as you write one positive word in the space allotted, you’re going to have a visually appealing finished product. It was the easiest job I’ve ever had of taking someone from the instinctive response of, “…but I’m not creative” to getting a marker in their hand and a smile on their face at their completed creation. We ended up creating for about three hours, but people could have gone all day, and ultimately I had to be like, “Okay, we’re wrapping up!” My friend Sailor and their partner Dre came and I hadn’t seen them in a couple years, and it was such a fantastic surprise. Sailor and I originally met as penpals (!) and they stayed until the very end, helping my dad and I clean up and carry the finished rocks outside. We started off with over 300 rocks, and plenty of people took their rocks with them to place out in their neighbor’s yard or somewhere else that was special and particular to them, but many people left their rocks, or at least one of them, with us, and with them I made an installation for people to take from just down the street from R. House (corner of 29th and Remington). With sidewalk chalk I wrote, “Take What You Need” and the #TheKindnessRocksProject hashtag and we began to place the rocks in a rainbow-like arch on the corner of the street. I can’t tell you how impressed I was with the creativity displayed from everyone who came out. The messages, the colors, the patterns. You all really went to town, and I’m so happy with how just the ones you left turned out! Has anyone else been browsing the hashtag on Instagram to see if anyone found any rocks in Baltimore? It’s kind of crazy how frequently the hashtag is updated and used! And it’s an honor to be a part of something so massive and moving. Which rock is your favorite? If you want to host an event in your area and have any questions, let me know and I’d be happy to help you out based on what I experienced. If you’re looking for another act of kindness to get involved with, check out my 2nd Annual Baltimore Scarf Abandonment Project which is getting a lot of attention! I’d love for you to be a part of it. If you were going to paint a rock, what would you make it say/look like? Thank you again for everyone who participated and helped (from Joe with spray painting, my dad with carrying and loading the car, Casey and Stephanie for working with me on venue space, and every single person who made a rock).