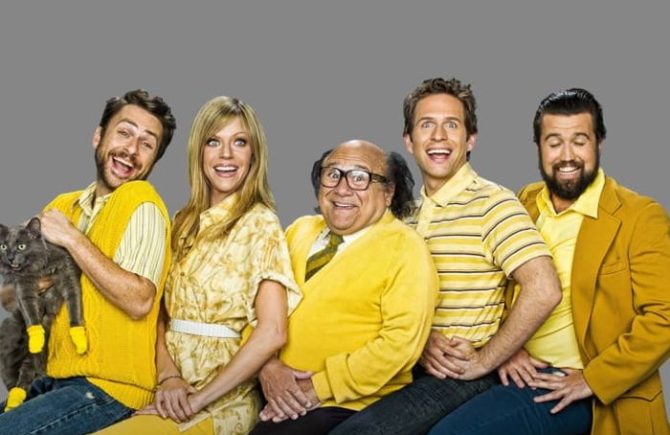 It’s Always Sunny In Philadelphia is basically my favorite show (hard contest with Arrested Development), and as much as the show just seems like a group of friends who made a show about narcissistic bordering sociopaths doing terrible things in a cycle who never really make progress because they’re obsessed with impulsive schemes and don’t care about the welfare of others… as a piece of art it is so much more.

Rob (Mac) didn’t get his break till he was 30, and he was still waiting tables at the time. He believed in the hilarity of the story he was creating with his friends, and woke up incredibly early every single day to go after his dream. He wrote, acted, directed, edited, and more. They almost got canceled after the first season, but someone as amazing, famous, and absurd, and hilarious as Danny Devito was interested in being on the show which saved it and they got a second chance to shine.

In between then and now they’ve made such hilarious and absurd comedy that I’ve watched the episodes hundreds of times. I know every word. They’ve comforted me. They’ve calmed me. I appreciate the people behind this show so much.

Fast forward to the season finale of the most recent season (13), where we actually see progression in one of the characters. Mac’s rage has calmed, and if anything he just seems docile and confused after finally coming out of the closet as a gay man. He struggles with the best way to identify with his new orientation while simultaneously come out to his father, and what happens is one of the most moving moments on television I’ve ever seen. I danced for 11 years and this is one of my favorite performances I’ve ever seen for so many fucking reasons (the obvious story, the fact that Rob isn’t a trained dancer, the rain/water, the tension of honesty you can cut with a knife). It wasn’t something you were expecting to see on a show where they’ve purposefully clogged toilets after breaking into homes, tampered with police investigations, and relentlessly berated their best friends for decades. But it happened, and it was fucking beautiful. I appreciate their ability to make statements about politics and societal issues in their own unique way for 13 years, but this was a blatant homage to the LGBTQ community, and it was sincere, honest, and heartfelt. ❤🧡💛💚💙💜 I am eternally inspired but what Rob McElhenney and his team have been able to accomplish over 13+ years. We can do hard things. We can conquer ratings, adversity, and predictions of bad reviews. We can go after our dreams and make them come true as long as we believe they’re worthwhile and we’re willing to put in the work.

If you haven’t seen this show, I recommend it. And if you aren’t interested in watching the entire thing, just watch the last episode of Season 13. It’s important work. The ending scene is below for you to watch.