The past six months of my life have been heavily influenced by the burlesque scene, but for the past seven years I have been in love with the show “It’s Always Sunny In Philadelphia”. So when I got an invitation from a DC burlesque performer to an It’s Always Sunny themed burlesque show, I thought I was dreaming. It was one of those beautiful worlds colliding kind of moments.

Lots of people were out of town for Memorial Day weekend, so it was the most intimate burlesque show I’ve been to yet. The Bier Baron in DC hosted the event, and while we waited for the show to begin, the audience got to watch old episodes of the show on a projector screen. At 10, Danny Borneo (of The Olde City Sideshow) presented the performers (and did things like shove a drill up his nose!). There were some really wonderful tongue-in-cheek details that you’d have to be a super fan to catch (like the doctor’s bag labeled “Mantis Toboggan”), but even if you had a general grasp of the show you would have been able to really enjoy yourself.

The evening started off with Candy del Rio doing her version of Sweet Dee. I was really into the awkward way she personified the character with the back and neck brace, paying homage to the Aluminum Monster.

I was kind of worried that there would be too many portrayals of Dee, since she’s one of the only women on the show, but I’m glad my worries were unfounded. Eyrie Twylight (of Black Tassel Boolesque) came out in full McPoyle make-up. With a unibrow, striped robe, and milk dribbling down her chin, she really confused my brain. When I talked to her during intermission, I told her how I was simultaneously disgusted and turned on when she performed. But that just means she really did her job well. 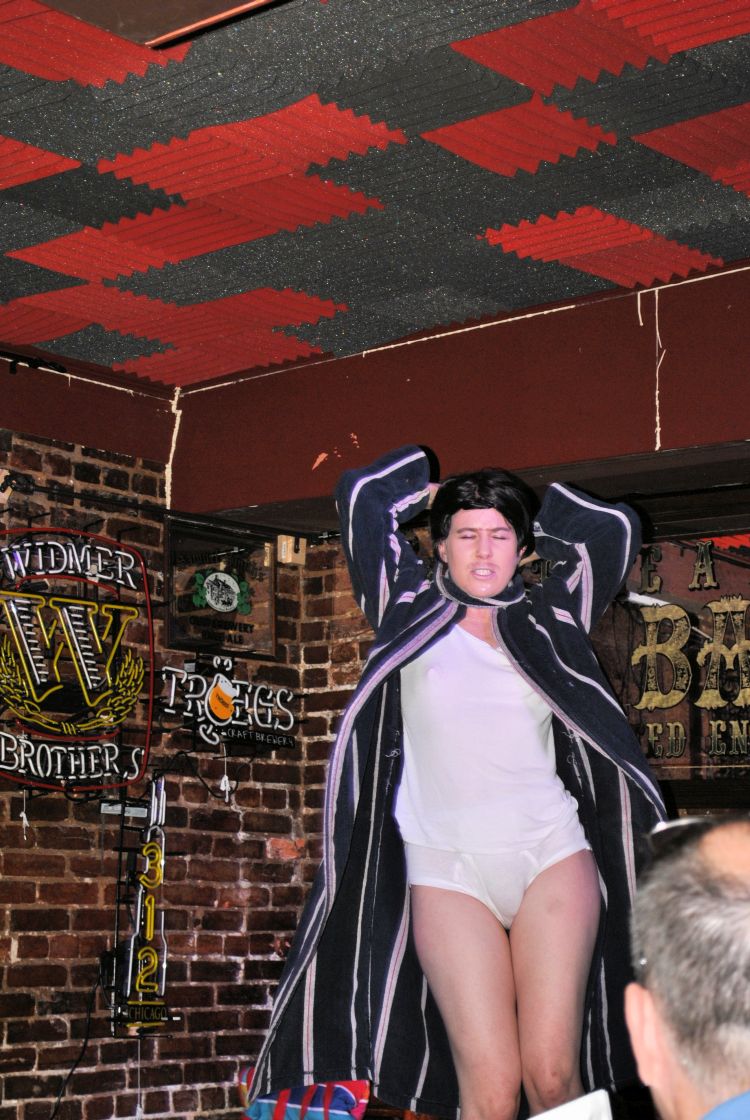 Anyone who has heard of It’s Always Sunny has probably heard of Kitten Mittens, the insane product that Charlie comes up with. Reverend Valentine killed it with her performance. She came out as a cat, and had Laura O’Toole (The Waitress) pin her down to put the mittens on her hands and feet (ahem, paws). 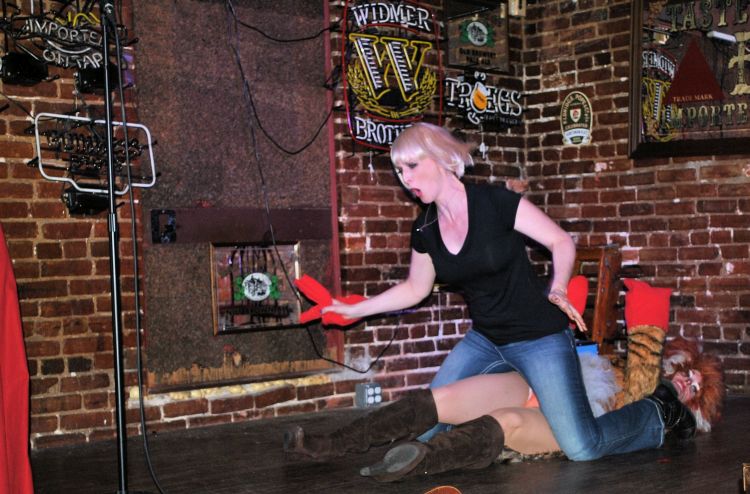 It wasn’t just burlesque performances, though. We were also gifted with some serious sideshow acts. Reggie Bugmuncher (the other half of The Olde City Side Show) came on stage to slurp down live night crawlers, chew and swallow a live goldfish, and jump onto a pile of broken glass. 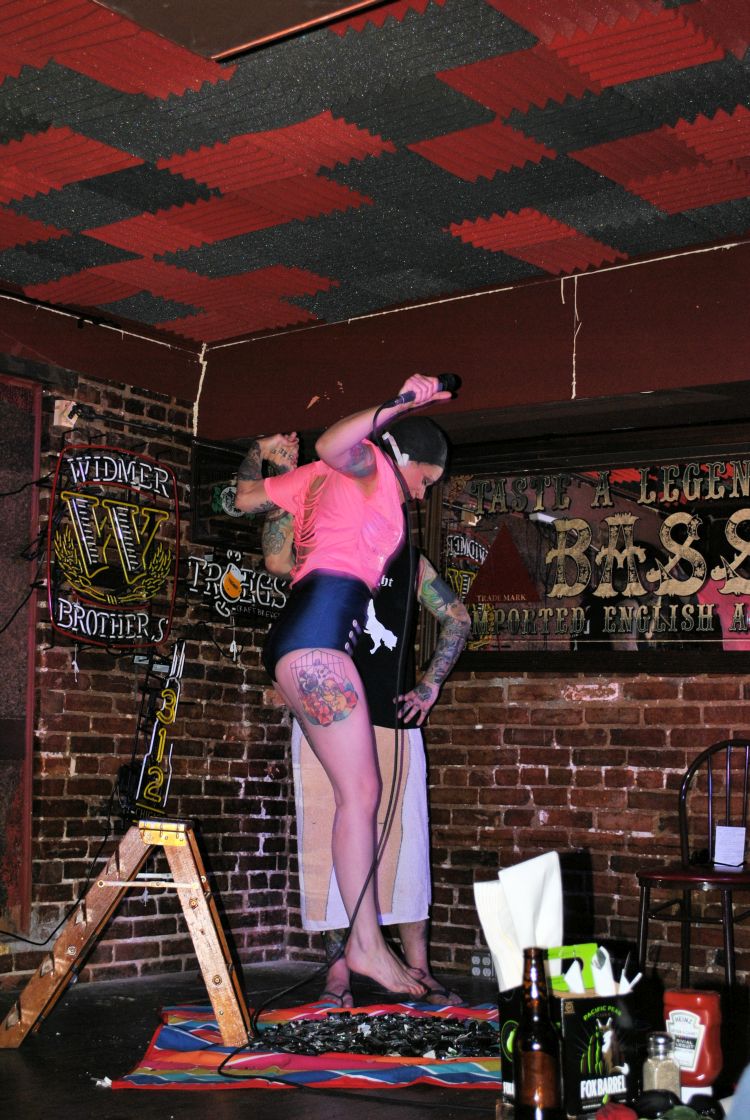 She also did her version of The DENNIS System, where she told us her skill of getting guys to sleep with her and never call her again. It was hilarious, and I actually got to go on stage for it. 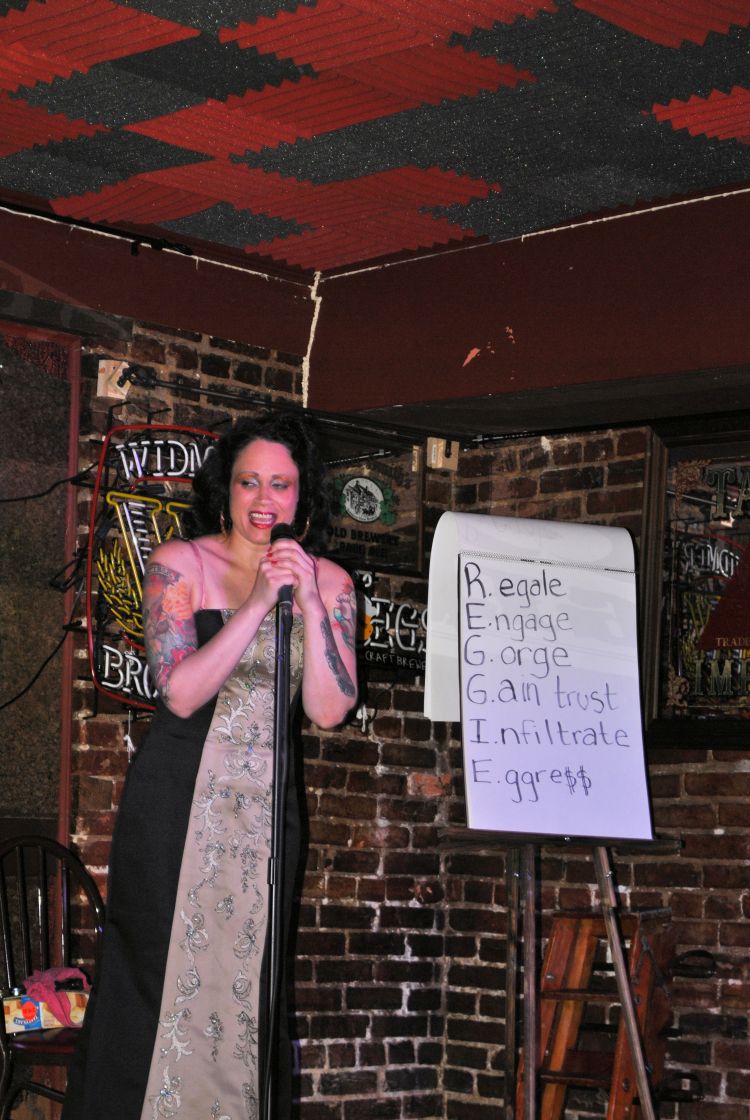 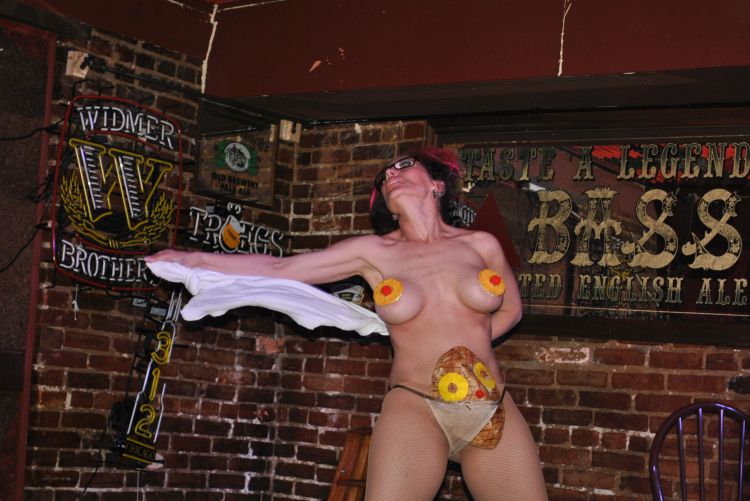 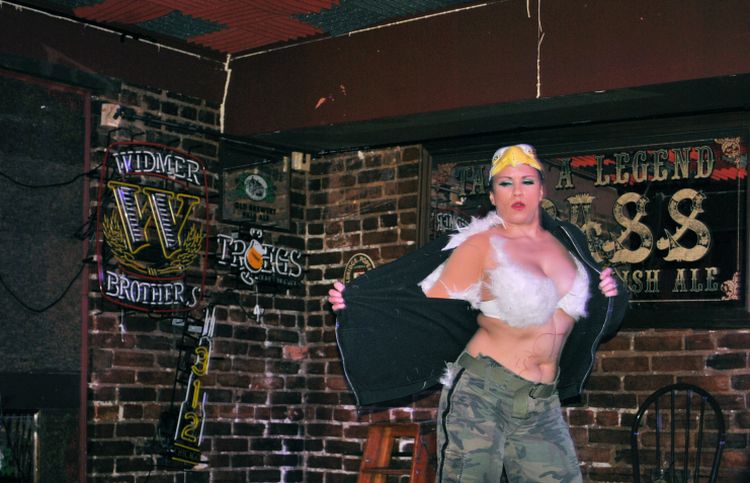 And it wouldn’t have been a Sunny themed show if the Green Man hadn’t shown up. 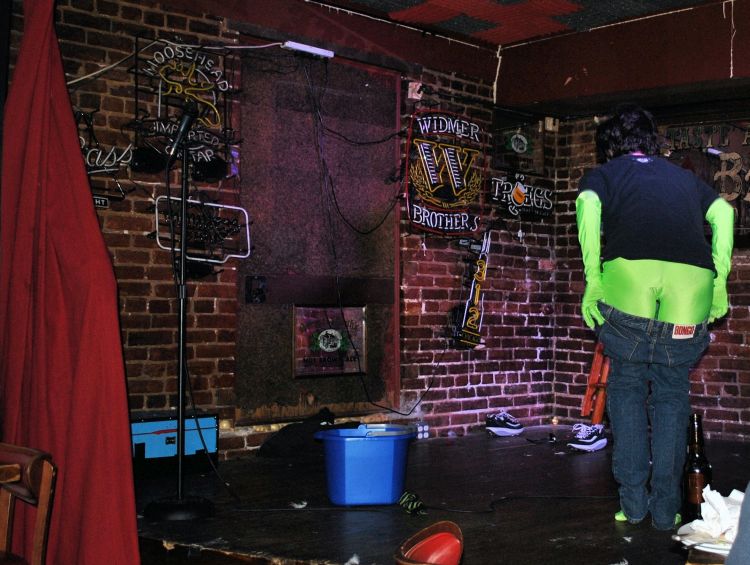 For the finale, the entire cast re-enacted the final number of The Nightman Cometh. At one point, the Day Man and Night Man ripped off each other’s clothes, exposing hot bodies and pasties, at which point Sean said “I don’t remember this part…” and I laughed like crazy. 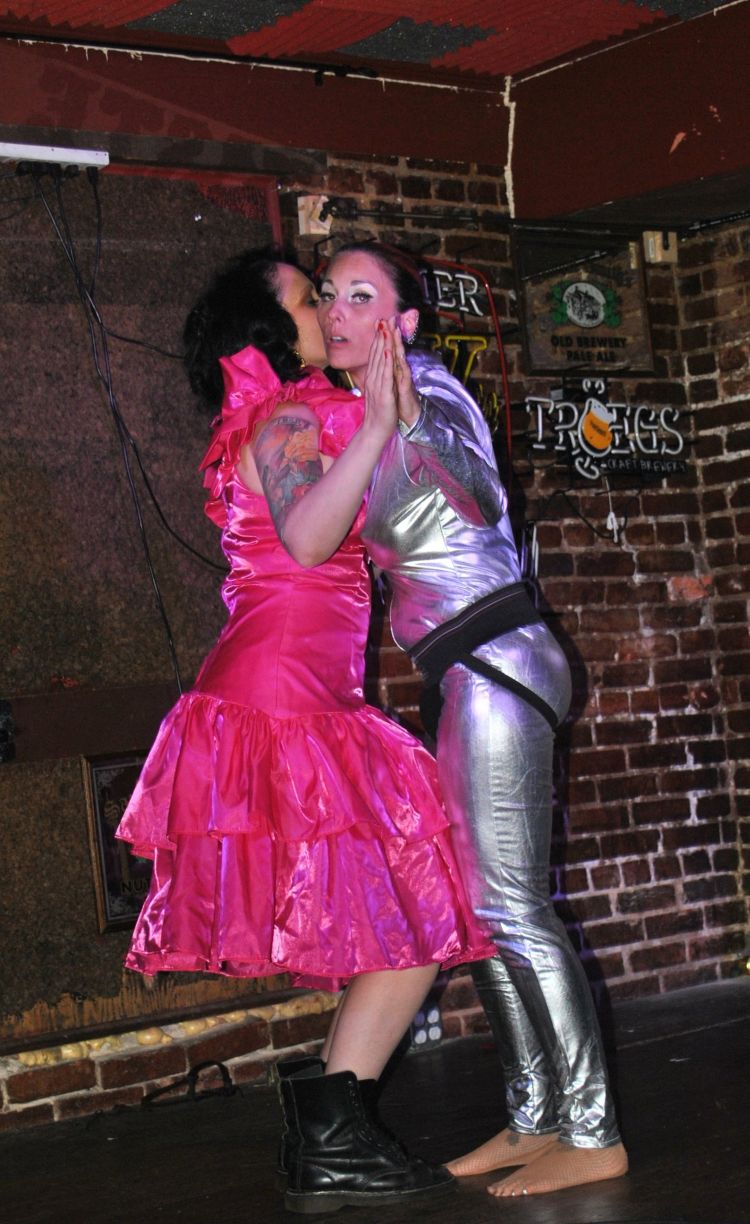 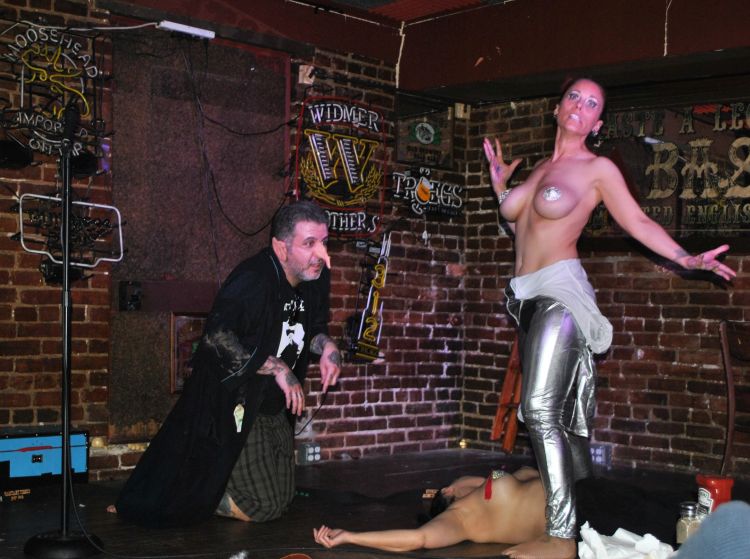 The Day Man has defeated the evil that was here… 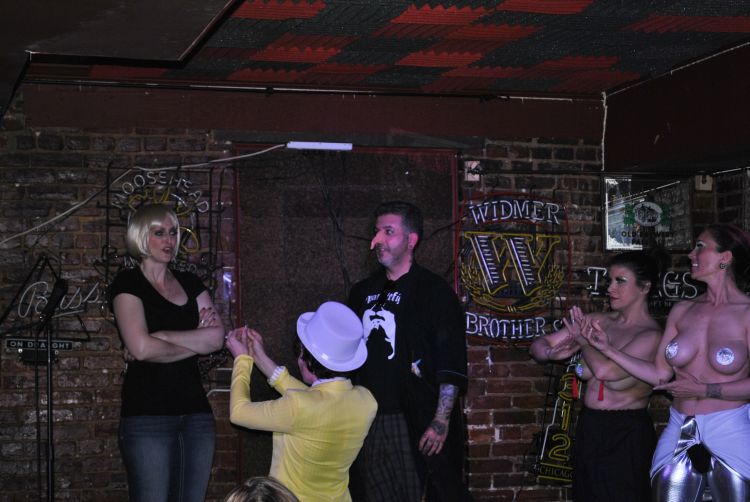 No, Charlie. I will never marry you.

And just to demonstrate that there was never a dull moment, Reggie offered the opportunity for you to staple money…to her body! She walked around with a staple gun and cleaned up! $5 for a thigh, $10 for her butt, and $20 for a boob…Could you resist? We couldn’t. 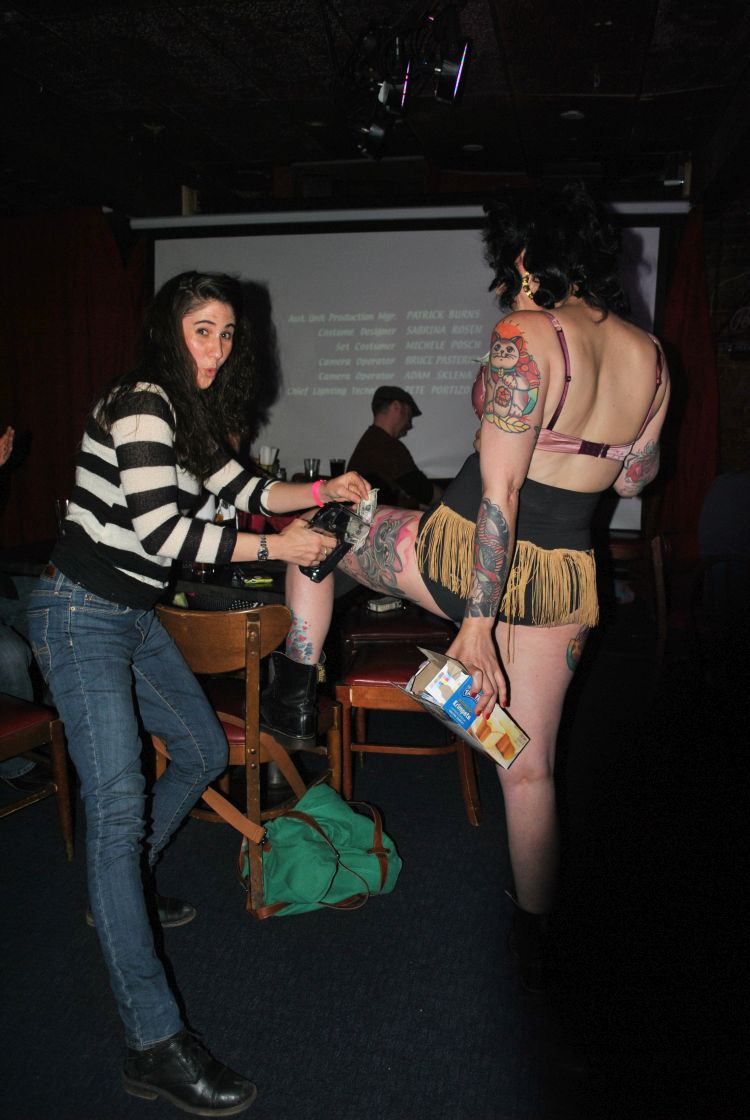 So, yeah. A wonderful night, beautiful performers, and clever interpretations of a fantastic theme. I hope they do it again.