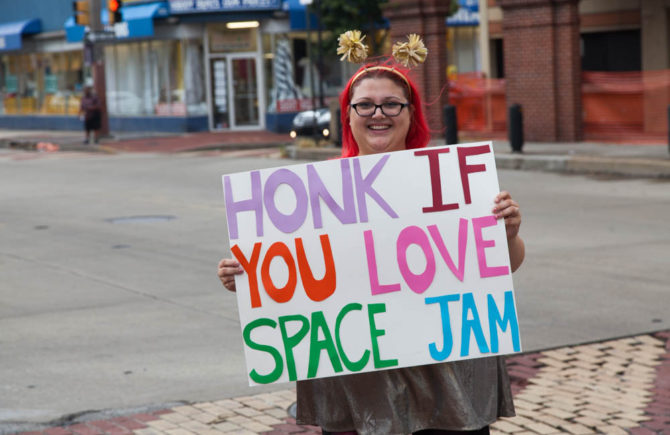 Honk If You Love Space Jam

Continuing on with the Honk If You… series, I’ve got a “Honk If You Love Space Jam” sign to share with you! When it was time to make my next sign, there were plenty of options that went with the theme of what I had been working with. Balloons, self-love, color… but all I could think of at the moment was the movie “Space Jam”, and I’m not one to throw away inspiration when it strikes, even if that inspiration is outdated and bizarre.

As I walked to one of the main intersections in Fells Point with Maura in my sparkly gold dress, gold head boppers, and space-themed leggings, I was encouraged and excited because I immediately got some honks before I had officially “set in” to holding up the sign. “This is going to be great!”, I thought. Turns out, it might have been a fluke, and “Space Jam” might be pretty generational. Most people didn’t honk while I was out there and really looked confused as they drove by. I felt sad and unsatisfied as Maura motivated me to walk back to the car because it was about to start raining. Two security guards standing outside a local bank asked what I was doing and I said, “The short version is I have a blog and I do weird shit for it”. They said, “Well, maybe people don’t know what you’re talking about because we thought it was the movie”. Of course it’s the movie! What else would I be referencing? Do you think I was polling to see if you preferred astronomy over preserves? I’m obviously talking about the movie. He told me I should have been wearing a basketball jersey. I told him it would have been nice if Michael Jordan was there, too.

I wasn’t ready to roll up my sign, metaphorically (and literally) speaking. So before I got in the car that Maura had already gotten into, I spread my legs shoulder-width apart and held the sign up “Say Anything” style and made aggressive eye contact with a man on the sidewalk wearing wearing Sennheiser headphones who was looking at the ground, minding his own business. After about ninety seconds, he looked up and saw me staring at him intently and laughed really hard. He went to spit something and he wasn’t even drinking/eating anything. That was really satisfying. Then, he said, “Wait, what does it say?” and read the sign out loud. I said nothing, and just made a facial expression that insinuated he keep thinking to figure it out. He said, “You mean the movie?” and I nodded profusely. His mouth opened like a sunbeam and he leaned against a tree and tapped it twice with his open palm while saying, “Honk Honk”. It was the most satisfying interaction I’ve had during this series of all time. I wish it was video taped. I wish I took a picture with him. I wish I knew his name. But sometimes the complete anonimity of the situation, the total absurdity of everything makes it that much better. If an interaction tops that one before this series is over, I will be very surprised quite honestly. Maura and I couldn’t stop laughing. It was perfect.

If YOU love “Space Jam”, hop on over to Instagram and leave a car and/or alien emoji in the comments to declare your love!

Check out more of the series by clicking on the “honk” tag.