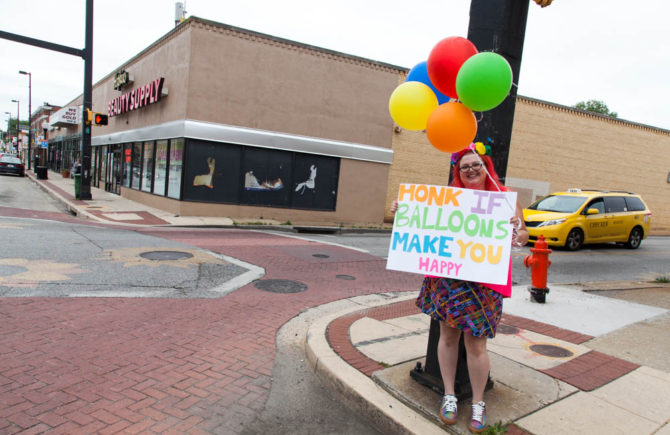 Honk If You Balloons Make You Happy

Continuing on with the Honk If You… series, I’ve got a “Honk If Balloons Make You Happy” sign to share with you! For this installment of the series, I very silly-ly made the sign in a different format, making way more words/letters than necessary for the sign! I could have just written “Honk If You Love Balloons” but I literally didn’t think of it until I was on the street. I have no idea why. I guess I was set on the idea that it was more about bringing joy than just liking something, especially since for this one I had decided I was going to actually have a prop and have the balloons with me as an example! The neighborhood I chose was Hamilton, a very northern neighborhood in Baltimore. It’s not a place most people calculate into their visits/weekend plans unless they know of something specific going on, which is silly because there’s plenty of awesome stuff to do (in all neighborhoods of the city)! We got a good amount of honks, but there was barely any foot traffic. It’s definitely more of a suburban kind of neighborhood — way more “houses” than rowhomes with driveways and most people use cars to get around instead of walking because of the proximity of the main streets to the neighborhoods; so it made sense there weren’t too many people walking around. But we definitely got a good amount of honks from all directions! Every honk makes me just as excited as the last. I never want to end this project. If balloons make YOU happy, hop on over to Instagram and leave a car and/or balloon emoji in the comments to declare your love! Check out more of the series by clicking on the “honk” tag.