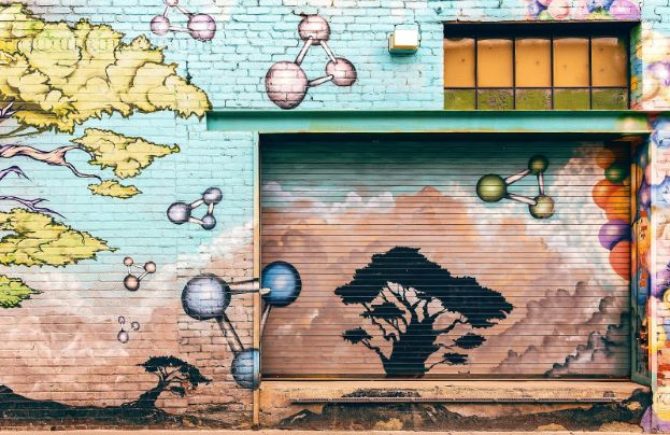 Art On The Verge Of Vandalism: What In Fact Is Street Art? Every day, we see art. When a backstreet painting suddenly appears on the walls of someone’s house or store, one thing is always clear. Art is a form of expression, and anything that reeks of political undertones or touches on our social world grabs the attention of even that person who doesn’t know how to interpret artistic creations.

In classroom discussions around the world, and in small talks on the street – everyone believes art is a product of inspiration. Somehow it is, but a growing concern that street art is vandalism elicits mixed reactions. Well, to understand this, let’s start by defining street art.

What Is Street Art? Down the bridge or at the subway station, street art puns often appear on walls, and we may never know who did a painting depicting political incorrectness. In the big cities, the works of anonymous artists do appear every so often, using graffiti supplies like stencil drawings and some are infused with fresh paint. In a nutshell, street art lights up public discourse no matter how hard we try to resist.

Graffiti refers to drawings or writings that have been scribbled, illegally prayed or scratched on walls in public spaces. The controversy is that those who do it never want to cross paths with municipal authorities, lest they end up in jail or pay fines of thousands of dollars.

Why Do People Draw Graffiti? Sometimes street art can be beautiful, while some drawings are brutality. According to the United States Dept. of Justice Office of Community Oriented Policing Services, there are different types of graffiti, such as the following: Now, considering the above, PapersOwl has written many articles on street art with the aim of exploring its purpose, not to mention that it is an area on which a student who wants to pay for college papers can do a presentation. Below are points that explore whether graffiti is on the verge or vandalism or not.

The art collection is a hobby, but what about if we cannot buy it just because a drawing is on someone’s wall? Well, that is where graffiti fit the jigsaw. We love colors, and so, an artist who partakes in tagger street art knows how to cheer someone up even without being part of their lives. Shepard Fairey, a renowned graffiti artist from the USA, painted hope poster for the Obama campaign in 2008, and his works remain in gallery displays.

Government hardly takes the idea of graffiti lightly. While street artists like Banksy from Bristol remain anonymous, a number of interviews given by some of them under cover-up circumstances show that the fear of victimization becomes manifest. Most people think one person couldn’t have realized ‘Banksy effect’; thus, it is a group of people doing what they know best, with graffiti as a weapon they use to hit the government.

The question is would Banksy’s drawings be as effective as they are today if the law protects street art? Well, free speech that seems to criticize bad politics or convey social norms shouldn’t be seen to vandalize public spaces because it cannot thrive under strict legal assessments.

We are never coerced to love or stop by graffiti signs. We simply do it. However, that is not the case with marketing messages that appear on street billboards every day. Advertising agencies buy and sell spaces with the intention of persuading the public to do something, even if they cannot afford it. It is a robbery of conscience and the freedom to choose what we want. On the flip-side, while graffiti may be violent, it opens up conscience for public discourse on communal and political matters. It is hard to imagine a world without street art. Sometimes they beautify public spaces, and with the popularity of world’s renowned artists like Fairey and Bansky inspiring millions around the world, the debate on whether graffiti vandalize public space remains hinged on purpose or intention.