One of my goals for 2013 was to not go on Facebook for an entire week. Two Saturdays ago, at 11:45 pm, I logged out of Facebook, Twitter, Instagram, Pinterest, and Tumblr. I turned off all notifications for my phone, removed bookmarks from Google Chrome, and the app buttons from my phone. I didn’t go on any of these sites until last Saturday at 11:45 pm. 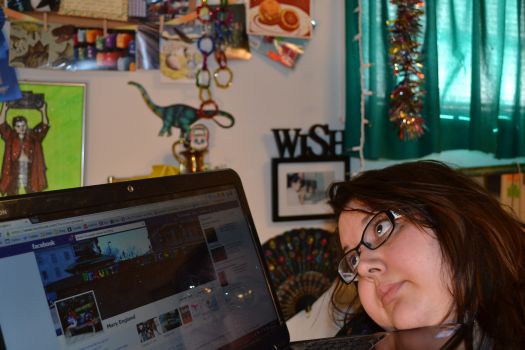 My original goal was to only give up Facebook, but I wanted to challenge myself even further with a fast of all social media. With the exception of a 24 hour period without any communicative media (more later), I allowed myself texting, general internet usage, and e-mail.

I’m very glad that I removed the bookmarks and buttons from my laptop and phone, because apparently clicking on Facebook is second nature. My hand, almost instantly, moves the mouse to the corner of the screen where I’m used to seeing that blue button. If I hadn’t taken those away, I probably would have accidentally logged in multiple times.

It was very interesting to realize how much time I devote to social media, because I was having a lot more free time left over each day. It’s kind of a compulsion to want to tweet something immediately, and some things didn’t feel real (or validated) unless I shared them with someone else.

The most difficult times for me, during this week, were: the “snow day” (it didn’t snow) I had from work, where I had ample down-time at home, and the day Saladworks offered a free salad if you “liked” their page. I would like to state, for the record, that I told the cashier about my fast, and that I would “like” their page first thing come Saturday night. He gave me the free salad and apparently is the owner.. because there was a giant picture of him on the wall. (I felt like Kevin McCallister in Home Alone 2, when he sees the toy store owner’s picture behind him.) I’m going to make him (Derek) a thank you card.

Overall, this was definitely a challenging experience. However, I thought it would be worse. I, like many people, am probably addicted to social media. I’ve developed a desire for a constant connection to people all over. It’s great to have those resources, but it’s also good to disconnect once in a while.

Have you ever given up social media?