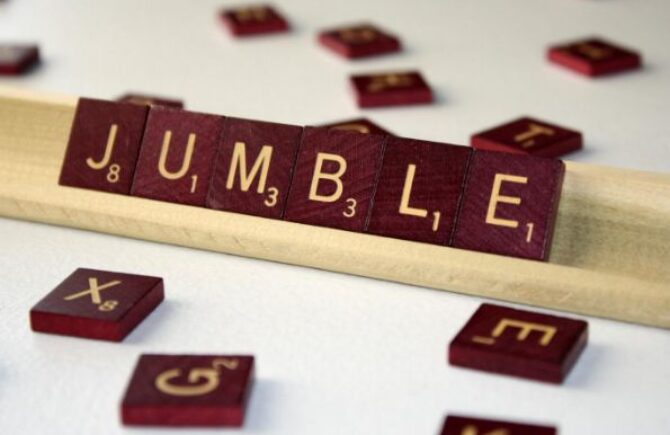 From fretting over class assignments to procrastinating with word-games-turned-daily-obsessions, we have all had our fair share of word jumbles. They are a delightful and entertaining form of the word game.

Many applications on the market for word jumbles combine the always-popular anagram solving method with funny one-panel illustrations that frequently appear in papers. Some cases provide us with many options but for others, you must find just that one word that contains all the jumbled characters.

Consequently, you will have a game experience unlike any other. However, participants could face various hurdles owing to the game’s peculiarity. These ideas and methods mentioned below will show you the broad picture, in case the game’s unusual challenges are giving you a hard time.

There can be multiple words in each puzzle. They can be two, three or even four words long. The majority of the problems are humorous rather than tough, but this does not imply that you will not be tripped up occasionally.

A significant fact to remember about the responses in a jumble is that they are mostly puns, clichés and other forms of wordplay. They are exactly what gives riddles their welcomed sense of humor.

a. Explore the Pun World

If you are not already a pun master, it would be a good idea to brush up on your knowledge of how these jokes operate. Understanding how puns are made can assist you in determining which words are the most suitable for a punchline.

b. Explore the Cliché World

Learning about clichés is similar to puns. A puzzle could become difficult to complete if you do not have sufficient lexical knowledge. If the game’s idiom usage baffles you then consider studying them too.

There is no particular order for finding the words to complete the game in word jumbles. Commencing with what you are just seeing could be easier if your word jumble requires you to include all characters and use every alphabet once in the same term.

Once you figure out a few characters, the whole word comes to you automatically. Find articles, parts of speech, and other minor terms to exclude characters from the list early on. These are also usually simple to figure out.

Ensure reviewing the entire section. Avoid skimming over anything as you could miss a potentially key point. Missing such crucial words could make it hard for you to solve a puzzle that would otherwise be easily solved.

There are instances when word puzzles do not make sense and you do not have enough time on your hands to figure them out. Many word-finding apps can assist you whenever you need to seek an instant reply.

From the unjumble letters, these applications will generate a comprehensive list of valid words. Then it is just a matter of selecting the appropriate terms for the challenge.

5. Look at the Affixes

Prefixes and suffixes together termed affixes can also assist you in efficiently decrypting the characters. Prefixes like re-, de-, or anti- are easily recognizable and indicate that the term starts with them. The termination of a word is revealed by suffixes such as -ed, -er, or -ing.

6. Distinguish the Consonants and Vowels from each other

The consonants should be written in a grouping, then the vowels should also be written in the same way. Examine each group separately for a better understanding of possible letter pairs. When you put the characters “b,” “l,” and “t” side by side, you can see that “b” and “l” might be in a term together, but “b” and “t” are unlikely to show-up together.

Whether you employ apps, classic letter tiles, fridge magnets, or just a pen and paper, a tangible approach is often the best option. Consider creating your characters in a circular pattern, like the numerals on a clock, if they are shown in a regular horizontal line. When you look at the characters in varied contexts, you will see more options.

Some consonants and vowels in the English Language want to be near each other, whereas, others are seldom encountered. Looking for such letter buddies and enemies is the first step towards solving word jumbles the old-fashioned manner. For example:

For further information on which letters want to stay close together, look up some consonant blends and diphthongs.

While it is tempting to look at your jumbled characters until a word appears, there are faster and easier alternatives to decipher word jumbles. Put these suggestions to test by attempting a few simple word jumbles.