Message In A Bottle

A couple months ago, I got a very sweet message from Rachael in California, who had just found my blog. She called me a “combination of Candy Chang and a RAOK crusader!”, so when she asked if I was up for collaborating on a project, I was all in. She had this idea for sending out messages in bottles! Random acts of kindness, handwritten notes, old school ideas… yes please! First, take a look at Rachael’s mission:

“I love reading stories about people finding bottles with messages inside of them. I like imagining the original message-writer flinging a bottle into the ocean, not knowing where and when their letter will be read. It’s especially exciting when the bottle is found 50 or 100 years—and many travel adventures—later. Then it’s a Message in a Bottle and a time capsule!

I thought it would be fun to do my own take on the Message in a Bottle idea by combining it with random (and not so random) acts of kindness. I started by preparing a bottle for my friend Sarah, whose birthday is coming up next week. Instead of sending her a card, I wrote her a long letter, threw in a ($4) winning lottery ticket, and sealed the bottle with a cork and some cute washi tape.” 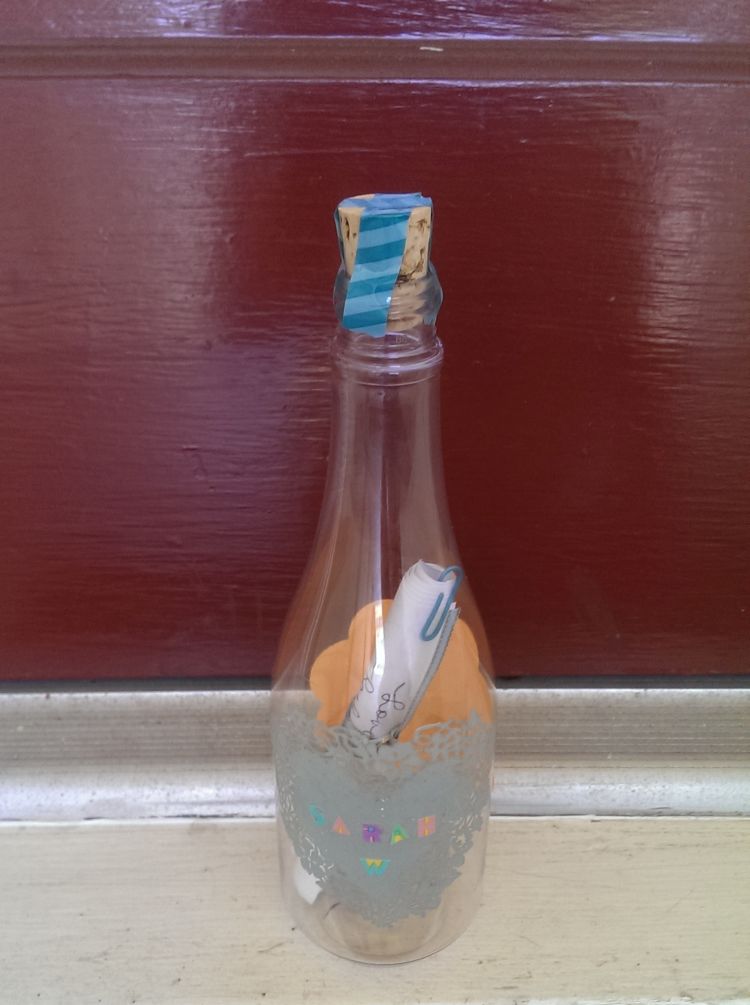 “I dropped the bottle off at Sarah’s mom’s house because Sarah is living in Germany right now, and her mom will be visiting her next week. So I wanted a bottle that was heavy duty enough to make it through airplane travel. The best heavy duty plastic bottles I’ve been able to find are these. Oriental Trading has a few different kinds of plastic bottles that hold up pretty well too, though they’re a little more flexible (i.e., squish-able) than the other ones.

I also wanted to leave some bottles on the beach for people to find. I decided to write the Message in a Bottle letter from the point of view of the bottle.” 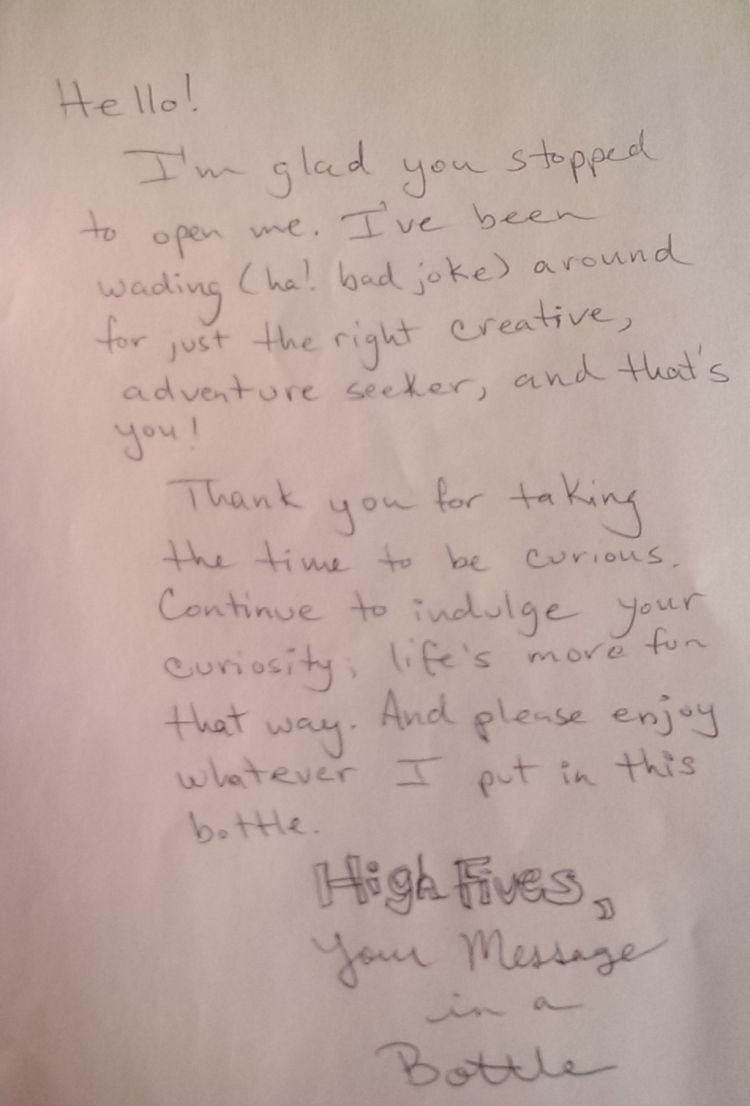 “I prettied up the bottles with some beads and shells, added an un-blown-up balloon and some stickers. I had a few cards for free coffee on hand (I’d gotten them at a conference the year before), so I rolled them up and attached them to the letters. When I ran out of free coffee cards, I substituted with dollar bills instead. (The paper clips are to help get the letters out of the bottles.)” 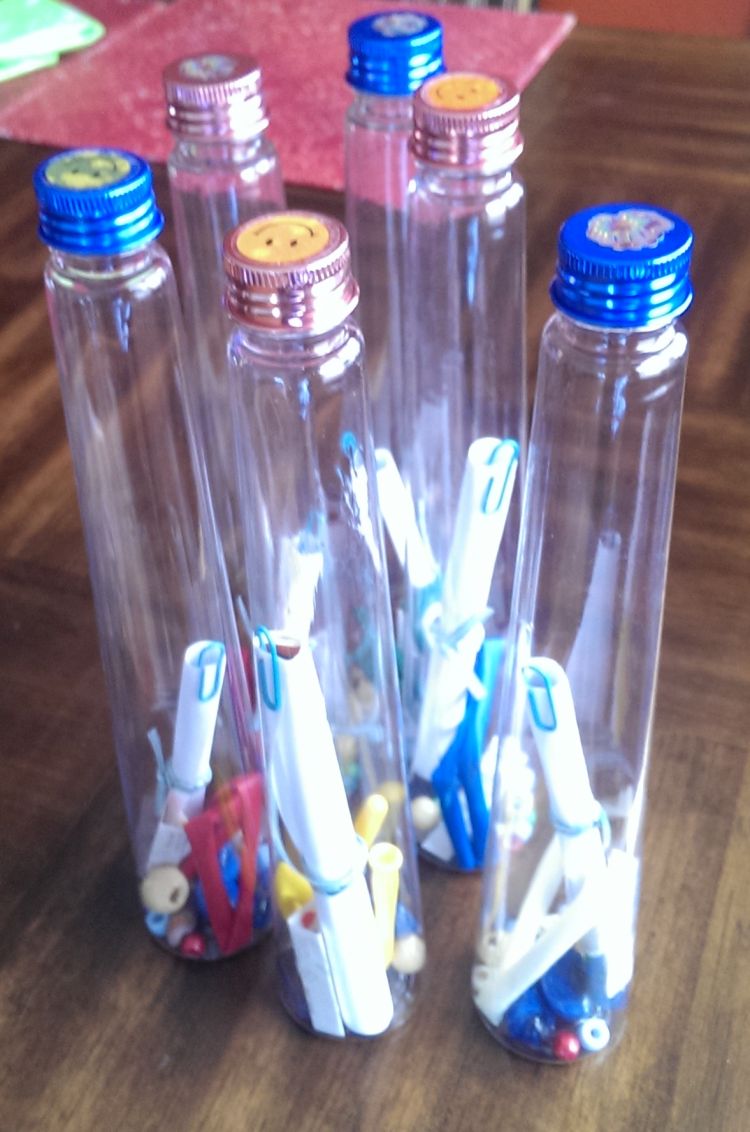 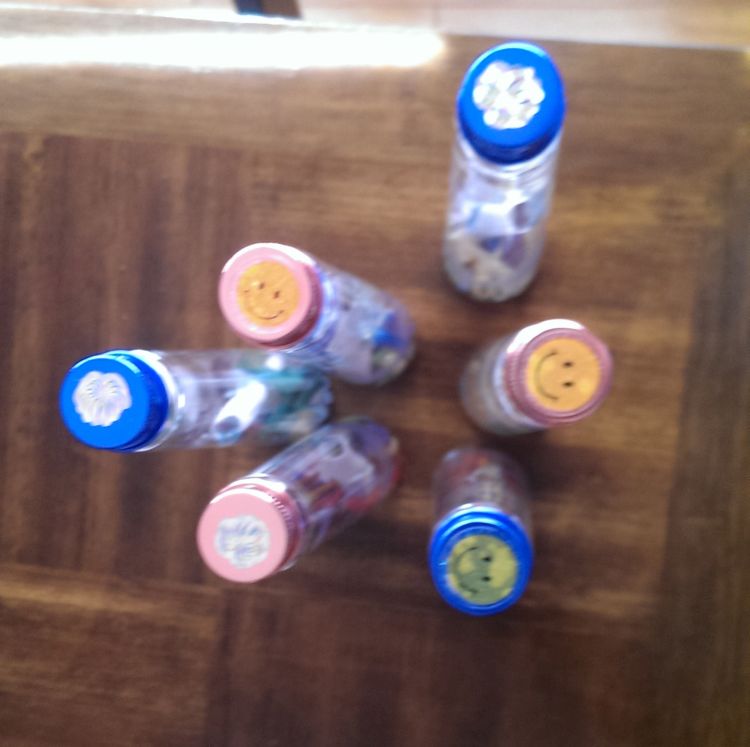 “The beach was really crowded, so instead of worrying about beaning people with bottles, I picked a slightly less crowded area of the ocean to throw the bottles in. I trotted off a little into the distance to become inconspicuous again, noting the smiling guy who’d been watching my amazing bottle-throwing skills. Obviously too stunned to move, he continued to sit on the beach, but it wasn’t long before a few other people walked by. I watched as they stumbled across a bottle and skidded to a halt. One of the women picked it up.” 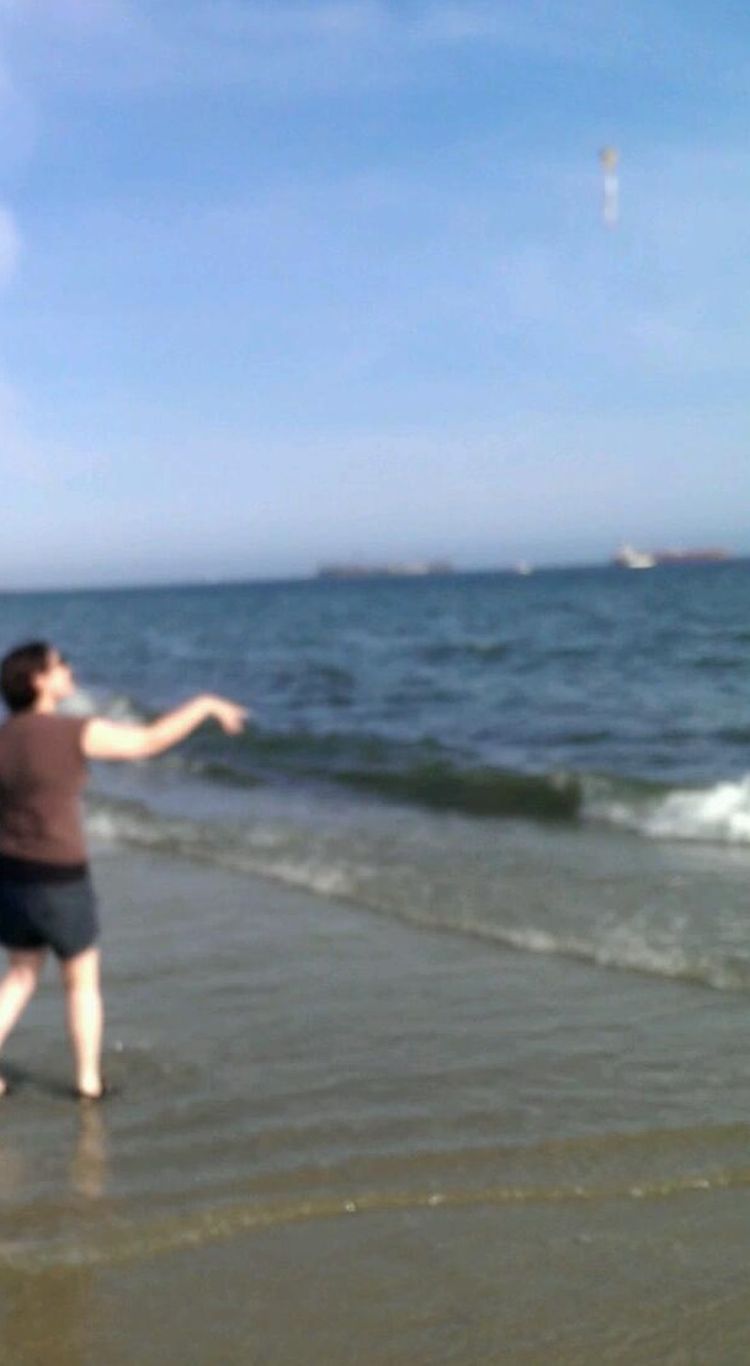 “Seeing her pick up the bottle, I started jumping up and down, making it completely obvious that I was somehow involved. Luckily, they didn’t notice because they were too busy finding two other bottles that had just washed up next to each other. Apparently that’s what happens when, in a fit of excitement, you throw all the bottles at once instead of walking, throwing a bottle, walking some more, and then throwing another bottle.

The women picked up two more bottles so they could each have one. I decided I was okay with that even though all the letters said the same thing, and when they figured that out it would undoubtedly make the experience a little less personal feeling.” 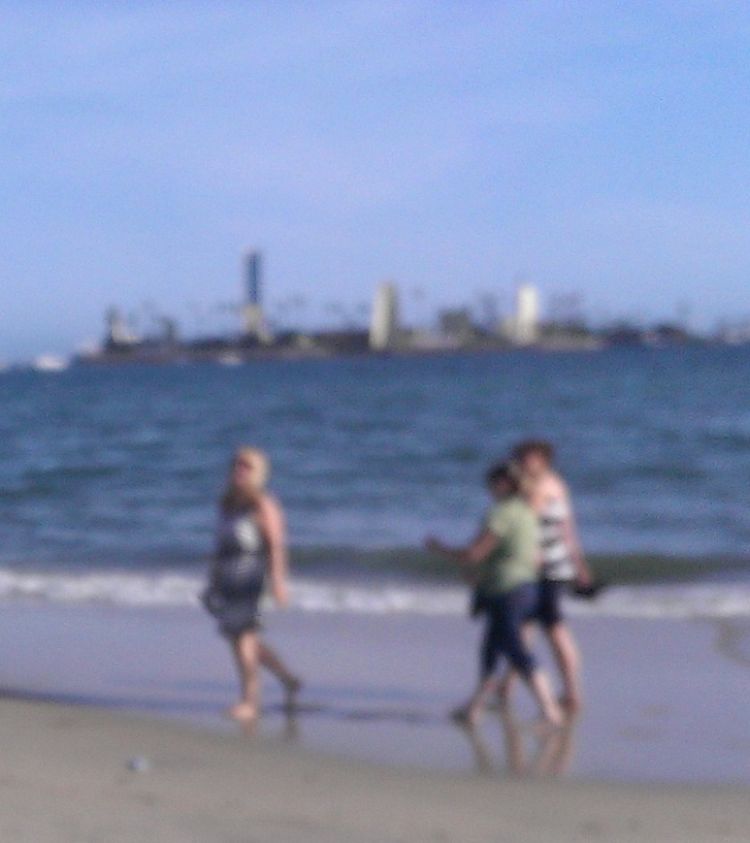 “A couple other people found bottles, so I did more jumping. I watched them open their bottles, and rejoiced in the way they ran to their friends to show them. In an effort to not come off as a creepy staring stalker, I left not too long after.

Everything about this Message in a Bottle project was fun, from the writing and bottle-filling process to the throwing and jumping. I really want to do it again, and since I still have plenty of bottles, I’ll try to do it again sometime soon. Maybe next time I’ll do it an area that only fills with water when it rains. That would be interesting.”

She’s right! This experience was really great. I purchased my bottles from Oriental Trading and filled them with confetti, You Are Beautiful stickers, pipe cleaners, and other shiny things. Half of them had messages to strangers, and the other half were used as letter holders– I mailed them to friends! (Which I forgot to photograph. So if you receive one and snap a picture for me, I’d love to see it!) 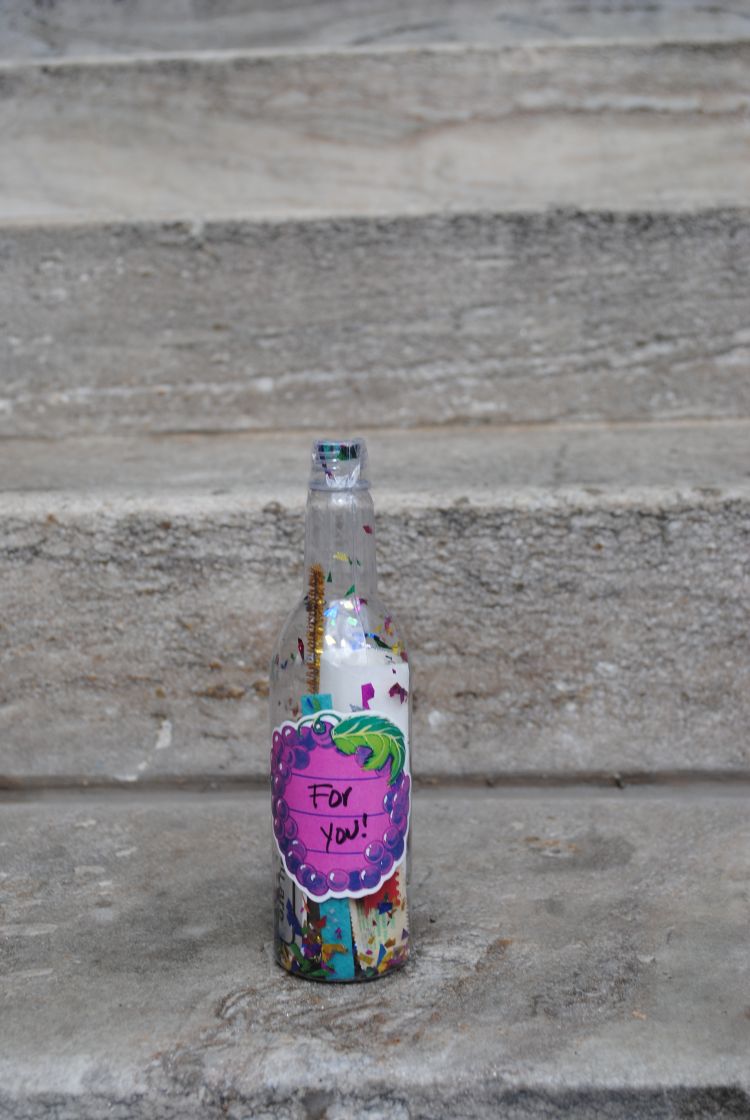 I had fun leaving my bottles places, especially in a giant puddle in the street! I thought that was a nice play on a “body of water”. 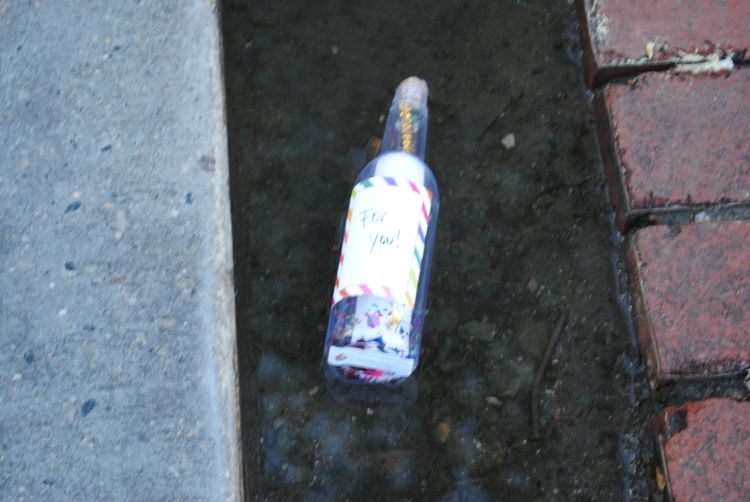 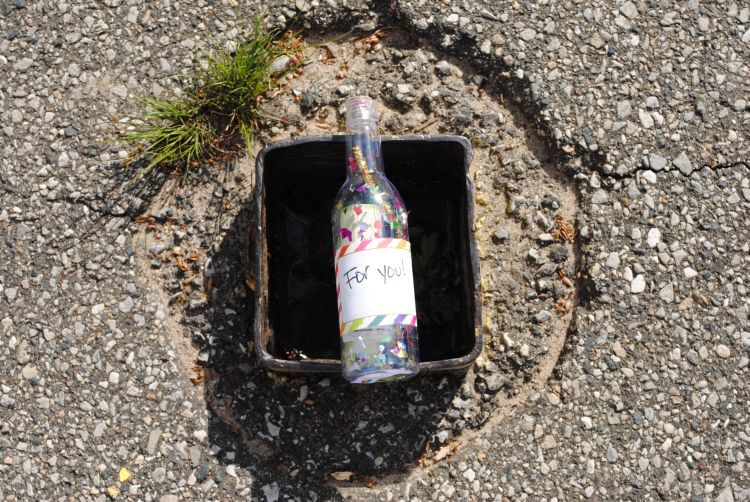 My bottles were left at various parks and different city streets. I hope that whoever found them enjoys them. And I hope that opening your mailbox to see a colorful bottle inside makes you smile!

Be sure to check out Rachael’s blog! If you’re interested in collaborating with me, please get in contact.