How To Get Imagination Back 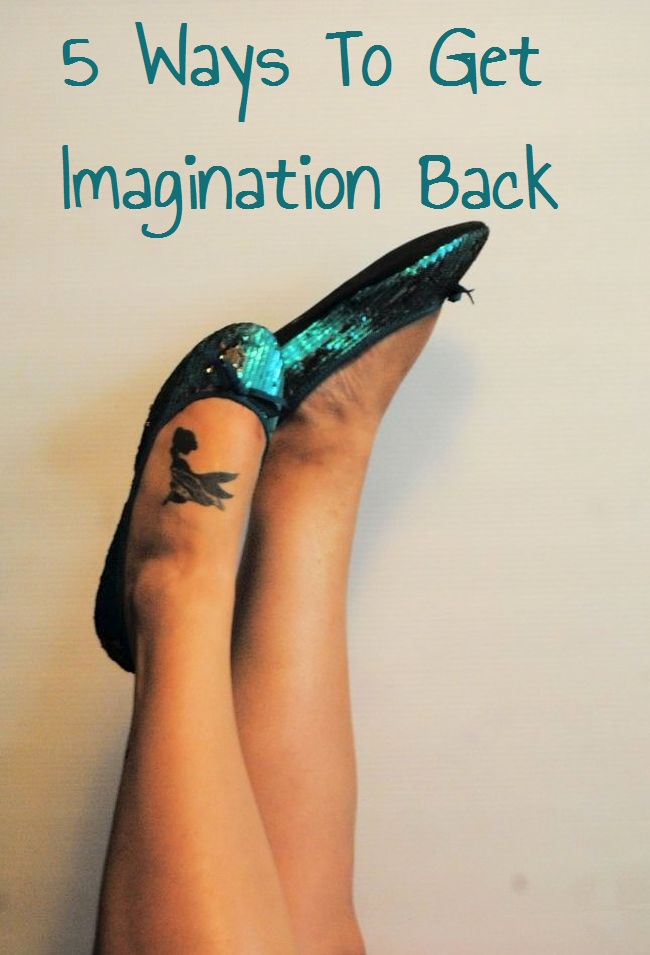 Recently, I was asked if I would write a post on how to get imagination back, and I thought that was a great idea. I looked around the internet, and there really isn’t too much on the subject. There’s a lot of information on being creative, but not too much specifically on imagination. So what’s the difference between creativity and imagination? Basically, we need to utilize our imagination to be creative. There are tons of ways that we can express ourselves through creative mediums be it engineering, a craft, directing a television show, or figuring out how to correctly diagnose a disease. But if our imagination isn’t running, active, or ready to go we’re going to have a problem being able to execute any creative activities!

First thing first, make sure there’s the potential for you to be inspired! Use the resources at your disposal like Pinterest, Instagram, and blogs in your niche. Browse the beautiful images and motivational texts to stir up some motivation and thought processes. Watch documentaries, read books, and have conversations with friends you admire. Do weird things and embrace your instincts. Take note of your senses in every new environment you’re in, or focus on one sense for a whole day. Try new things every day. Eat new foods, drive to new places, and wear new combinations of clothing. Don’t allow yourself to fall into a rut! Ruts drown out that inspiration that you so desperately need to tap into your imagination.

Who has the best imagination? I think we can all agree the answer is children. Kids have a natural ability to utilize their imagination in almost every situation. They don’t even have to try. Hang out with kids! Note the way they act, talk, and react to stimuli. Make it a challenge for yourself to access make-believe and pretend scenarios. Maybe you want to take on an entirely new persona, complete with an accent. Maybe you could turn your house into an entirely different place. A tiki bar, a carnival, or a beach? Transform your life! It doesn’t matter if you don’t have all the materials. In fact, it’s better! Allow your brain to fill in the gaps. And the best advice I can give you in this category is to play. Play play play! Make time for play.

You know what else kids don’t worry about? Rules! We aren’t born knowing societal norms, we learn them. Take some time to throw them out the window. Live your life like Mad Libs! It doesn’t matter if things don’t make sense. Eat baked ziti for breakfast and buttermilk pancakes for dinner. Wear costumes to run errands. Tell strangers your favorite color, only send audio clips of your voice instead of written texts, or bring a boombox to the grocery store and press play when you’re ready to do the Electric Slide.

Another thing I recommend is removing the risk of failure. You know why? You’re going to fail. It’s inevitable. It’s also okay! Lots of times we limit not just our actions, but our ideas, because we’re worried about what’s going to happen if it doesn’t work out. So what would you do if you knew you were going to succeed? Live like everything is going to work.

When I say environment, I’m including your frame of mind. Yes, you’re going to want to organize, clean, and declutter your living and creating spaces. I also recommend rearranging things! A change of pace will do wonders for you. In terms of your headspace, you want to reduce stress, meditate, and do brain-stimulating exercises. I also recommend doing guided imagery, where you have to create your own settings in a relaxed scenario. It’s can be like daydreaming!

And when all else fails, just try to throw yourself into a creative activity and hope that the imagination follows! Make up life stories for strangers that walk by you, alter a blank piece of paper in any way, and use five different mediums to express the same thing. Try to do something you usually do, but remove an element that’s usually consistent in it (like going out on the weekends but not drinking)!  Make up a new word and incorporate it into every day conversation! Speaking of conversation, try just talking out loud, non stop, for ten minutes. Record yourself, talk to a friend, or even just speak into a mirror. You’ll be surprised what you can come up with just free-associating.

Another thing you can try is implementing a daily challenge, where you create ____ every day even if you’re not feeling like it. Obviously creating without inspiration or imagination can have its drawbacks. Forcing yourself to make something can yield unsatisfying results, and you might burn yourself out. Keep in mind that these, and the rest of the ideas in this post, are just suggestions. They aren’t a perfect recipe, and I recommend just trying things out to spark something inside you!

What do you think? Any additional suggestions?