Chronic Illness: Making The Most Of It

I met Phoenix through Joe over a year ago. She’s full of life and way more experience than you’d expect someone so young to have. Since meeting her, I’ve learned a lot from her and been on multiple camping trips with her. She’s invited me into their existing group without judgment. I’ve unfortunately got to witness first-hand how her chronic illness has affected her energy, relationships, and quality of life.

I was so relieved when she recently received her first diagnosis, but there’s still a long way to go. She posted a photo of her with metal chain wrapped around her feeding tube, and I immediately went crazy. I started scooting around in my rolling chair, bouncing up and down. This was something the world needs to see, and I want to share it with them. I asked Phoenix if she would share her story and projects, and I hope you enjoy it. 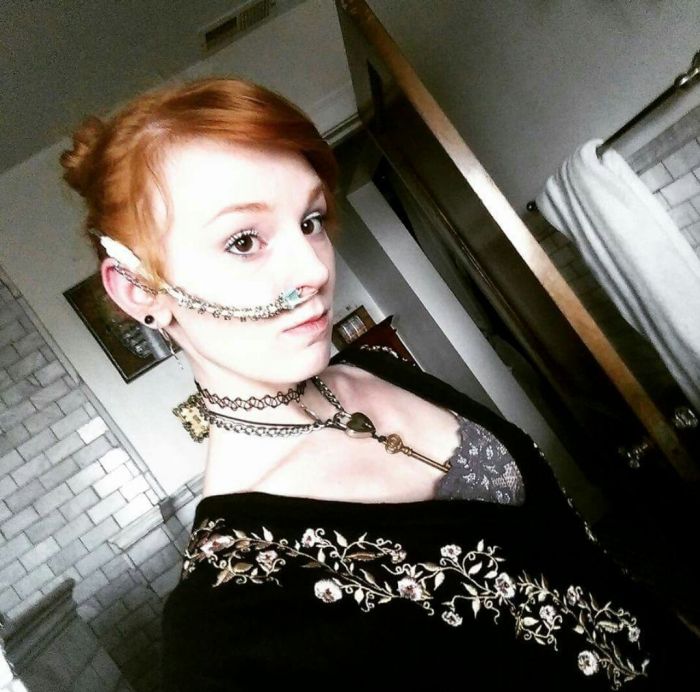 How long have you had a chronic illness and how has it impacted your life this far?

I’ve been sick for the better part of two years now, and it has completely changed my life. It affects your job (I lost mine), your education (I don’t have the energy to get one), your relationships (I’ve lost my share), it’s not pretty. I used to do martial arts and go camping constantly. I used to hoop, dance, sing, do fire performance…. and it’s probably been about 8 months since I have gotten to do almost any of those things. I’ve lost so much muscle that I need physical therapy to get back in the condition where I could walk a mile. Right now a flight of stairs is enough to take my breath away. It’s been a tough change.

What were the biggest struggles with having an illness that went undiagnosed for so long?

I think the worst thing was the fear of not knowing, and the fear of not being believed. With my symptoms, it was so hard to narrow anything down, and my tests just kept coming back normal. I was scared that I could only have so many normal tests before someone would start to question if I was faking my symptoms. On top of that, I had the fear that I was just getting sicker, and not knowing is terrifying because if you don’t know what it is, it could be anything. I could be fine, or I could have been about to die. I just didn’t know. 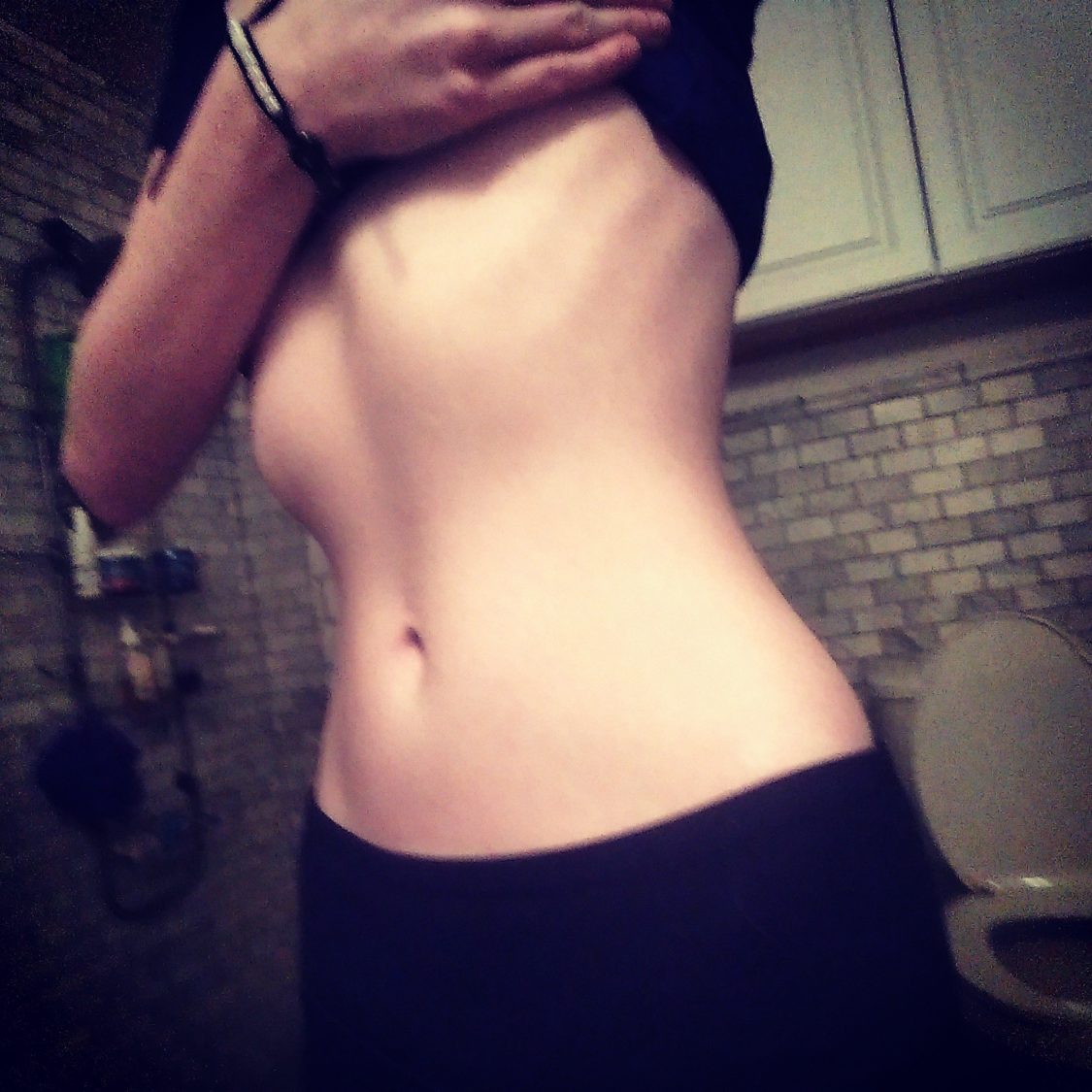 Do you have any advice to people who are in a state of pre-diagnosis?

I actually have only a partial diagnosis myself, and if I had to tell anyone facing what I’ve faced something it would be just don’t give up. I know it hurts, and I know you’ve suffered more than other people will ever know. I know it’s scary and I can’t promise you that everything will be okay, but don’t make the same mistake I did. It is so hard to wake up every day knowing that you’re still sick, and there is a point when you may think that it’s not worth the fight anymore. There might be a time that this life doesn’t seem worth fighting for. But I promise you, I SWEAR to you, it is. No matter how bad things seem, the answer could be right around the corner.

What can you tell us about your diagnosis and how your life has changed since knowing what you are suffering from?

As I mentioned, I only have a partial diagnosis. In my particular case, something caused me to loose several pounds, and that was enough to trigger the SMA Syndrome (Superior Mesenteric Artery Syndrome: in layman’s terms, two of my arteries are pinching a part of my small bowel, causing an obstruction). Finding the SMAS was a turning point in my care. Suddenly I was no longer an “otherwise healthy 22 year old” but a patient in need of urgent care. It took almost a year to find out what was wrong because SMAS is so rare (0.013% of people) and so hard to diagnose, because most diagnostic tools can’t see it. I had every test in the book to find the damn thing: upper endoscopy, colonoscopy, multiple CT scans, HIDA scans, a small bowel follow through, abdominal ultrasound, pelvic ultrasound, a barrage of blood tests, you name it. I was glad to get some sort of diagnosis, as I said earlier but SMAS is a pretty serious disorder, and that can be a little scary. It’s really tough to know that you’re essentially fighting for your life. 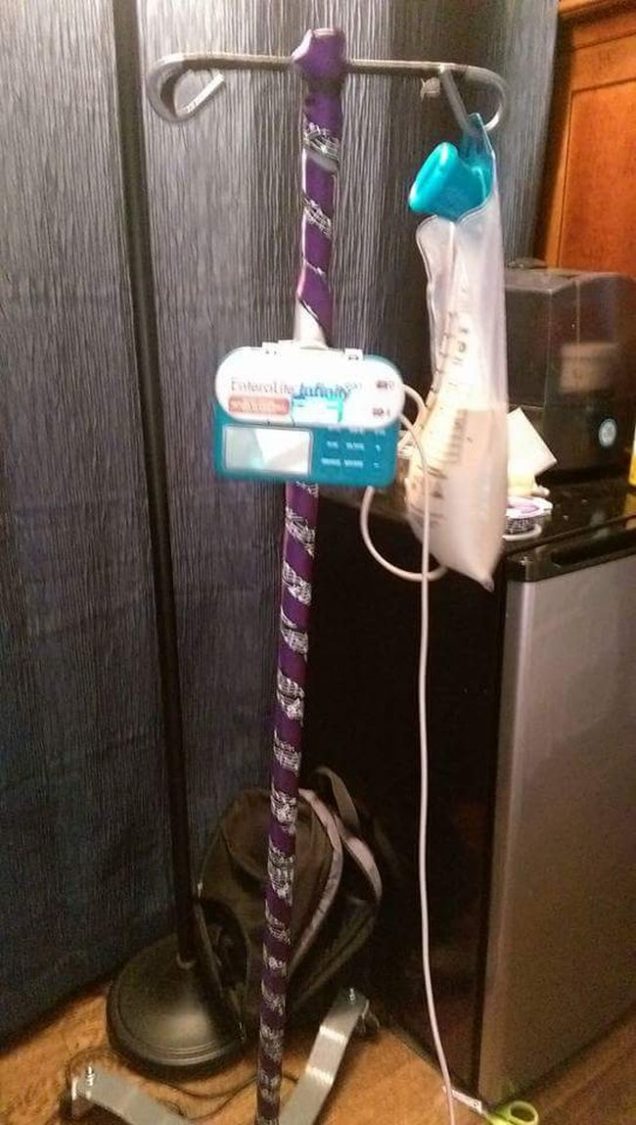 What advice do you have to the general public about chronic illness?

The general public doesn’t really understand that you can be sick without looking sick. Don’t jump to conclusions about someone just from a glance; you have no idea what people are going through. You may be irritated to see someone who is apparently healthy parking in a handycap spot, but you have no idea why that person has a handycap tag. Some of us, myself included, can hardly walk up a set of stairs without loosing their breath, or even fainting. Be patient, we know our illness is difficult and frustrating to friends and family. Trust me, we hate having to cancel plans for being sick as much as you do. Chronic illness can be very isolating, people get upset for missed plans, people get tired of hearing about being sick, or worse people begin to doubt your illness, so standing by someone who has a chronic illness is the kindest thing you can do. We are scared and sick, and we appreciate simple company and emotional support more than you know. 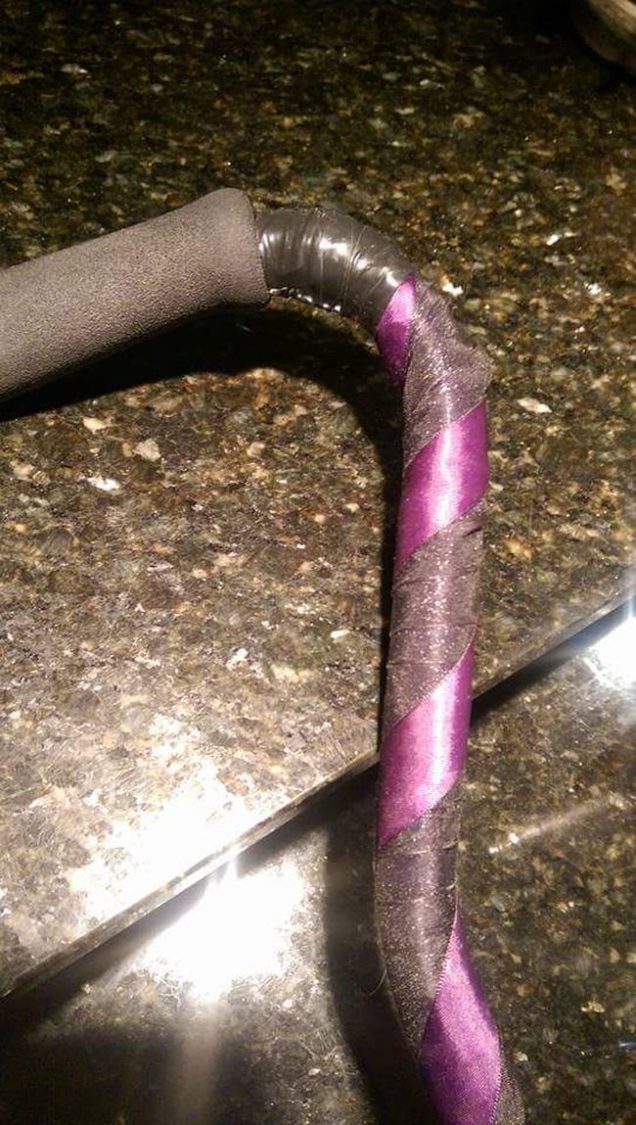 I currently have an NJ (nasojejunal) tube, (nasogastric tubes [nose to stomach] are also used) which runs from my nose, down through my stomach, past my stomach into my duodenum (the first part of your small bowel), past the obstruction (the SMAS) and into my jejunum (the second part of your small bowel). My condition makes it hard for food to pass the through the duodenum because my SMA is pressing on it and it causes a significant block. We use a pump which pumps the “food” into the tube, past the obstruction, and directly into my digestive tract.

I was really self conscious about it at first. People tend to stare, and it hurts, so it just seemed awful. I cried to my partner that he didn’t have to go out with me because I’m hideous with this thing. He comforted me and we thought, “You know what, if they’re gonna stare, lets give them something to stare at.”

I’ve always wanted a nose chain (my mother would die), so we came up with the idea of wrapping it in chain, which went from my nose, up the tube and then attached to my ear with an earring. It turned out amazingly and someone on the street told me I looked fantastic. I was so happy that I’ve started to consider other ways to spice things up, like wrapping it in various colors of ribbon to match what I’m wearing. 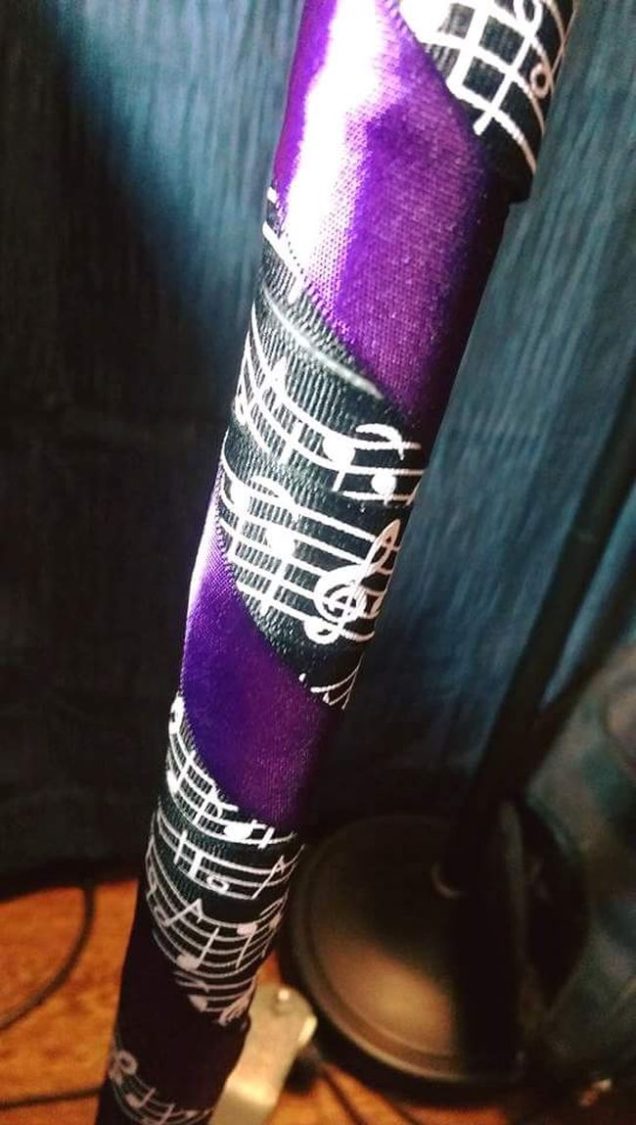 I actually have a cane that is wrapped in ribbon as well. I just couldn’t stand the awful color. You can also work your decoration to match your outfit or whatever else you like. These ideas aren’t limited to feed tubes or canes. You can wrap parts of an IV stand (I did!) wheelchair, or crutches in ribbon, or add some chain for a more alternative look.

For things that actually belong to you, sharpies are your best friend –note: a lot of medical equipment is delicate, and often has to be returned to the hospital/doctor/(home) nurse, so none of the modifications should cause any damage to the equipment. You also want to make sure that what you’re adding is completely removable. 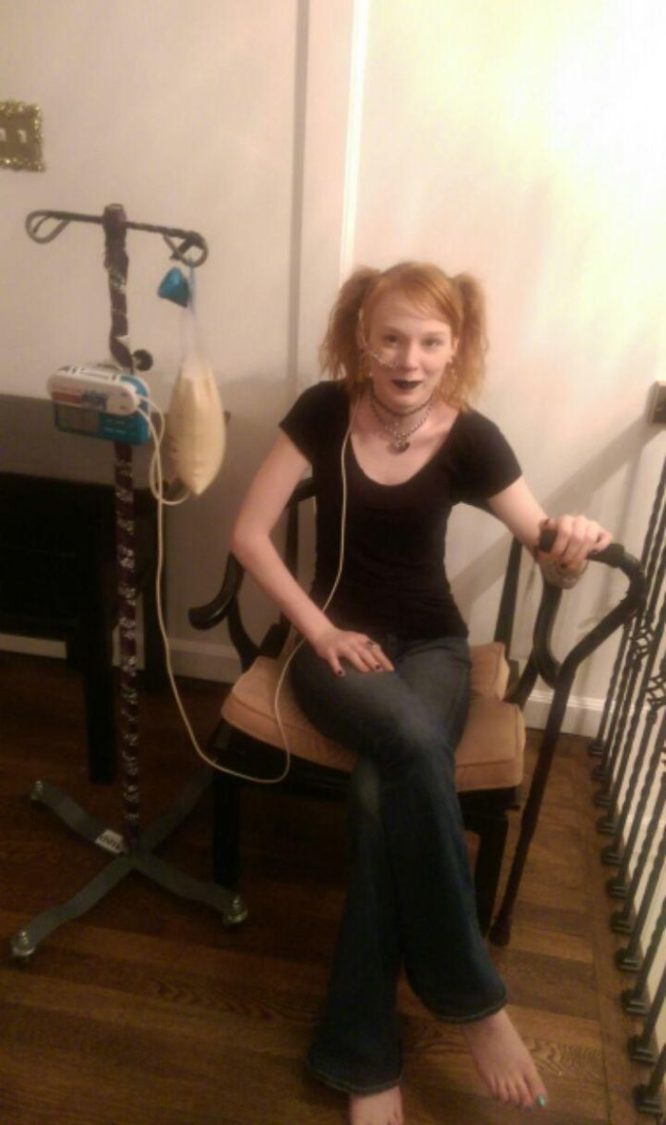 If you are suffering from a Chronic or Invisible illness, you are not alone; you don’t have to hide. We are still people and we deserve to feel good about who we are and how we look. I know that CI’s make it hard to feel attractive. Between my feeding tube and my emaciated appearance, I could barely look at myself without bursting into tears. It hurt so much, and I thought everyone would think I was disgusting. I’m sure many of you feel the same way. I look at pictures from before I got sick and I marvel at how healthy and strong I looked. Then I realized: I may not look like I used to, but I’m still me and I’m still beautiful. You are too. I know it’s hard to believe, but you are. You are still beautiful, and you are still strong.

I want to get a blog going with pictures (selfies are fine) of other people will CI’s decking out their gear and showing that they are proud to be themselves. I want to let the world know that we are here and we are not giving up. Let me see your colored cast, or your metal feed tube. Go crazy, be creative; be YOU. Then, take pictures and post them on Facebook, Instagram, or Twitter with the hashtag #MoreThanOurIllness to be included. (Don’t forget to include the hashtag in your photo. Signs are great!)

I would like to credit everyone who participates with a name and what your illness is, but I understand many of you are not comfortable with that; that’s OK! I can use whatever name you like or none at all. I can list your illness as private. YOU MATTER and I want you. 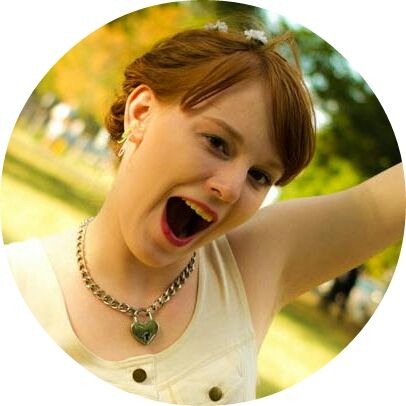 Phoenix is a 22-year-old singer, dancer, sideshow artist, model, and actress. A performer at heart, she loves the spotlight, but as an empath she relishes listening to other people’s stories and helping others when she can. Though she deals with many of her own demons, she is determined to change the stigma of invisible illnesses, and makes every attempt to help educate others. You can find her on Instagram and Facebook.

Want even more tips, tricks, and support with your journey of self love? Treat yourself to my e-course, Self Love: The Key To Happiness.